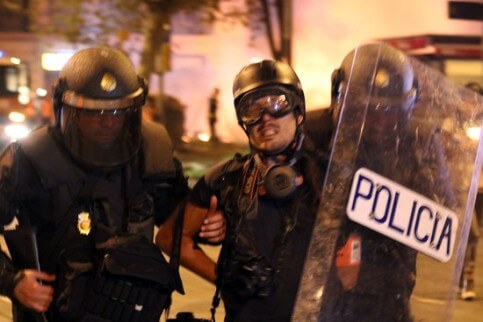 A media observatory group, Mèdia.cat, has reported that 58 journalists were injured during the unrest in Catalonia between Monday to Friday.

According to the entity, on Friday alone 20 media professionals were injured, most of them due to the Catalan and Spanish police operation.

An association of journalists, Grup Barnils, denounced the ‘attacks and arrests’ of journalists, which they called ‘unacceptable’. A photojournalist for El País newspaper, Albert Garcia, was detained for few hours during the riots on Friday night.

In a statement on Saturday, the Grup Barnils asked for the Catalan and Spanish home affairs ministers to step down.

Most of the journalists injured were visually identifiable as members of the press through vests and armbands.

‘The fully unprecedented number of attacks on journalists on Friday and the arrest of a photojournalist leads to think of a deliberate ploy against informants. These series of actions certify that what has been witnessed in the past few days is an unprecedented attack on the right to inform,” read the statement by Group Barnils.

The criticism to the police also came from the political sphere. The Catalan vice president, Pere Aragonès, asked for the Spanish law enforcement to act with ‘proportionality’.

Spain’s home affairs minister countered criticism saying that both Catalan and Spanish police forces were acting with ‘proportionality’ and denied that the government was ‘overwhelmed’.

Up close on the ‘Freedom March’ to Barcelona