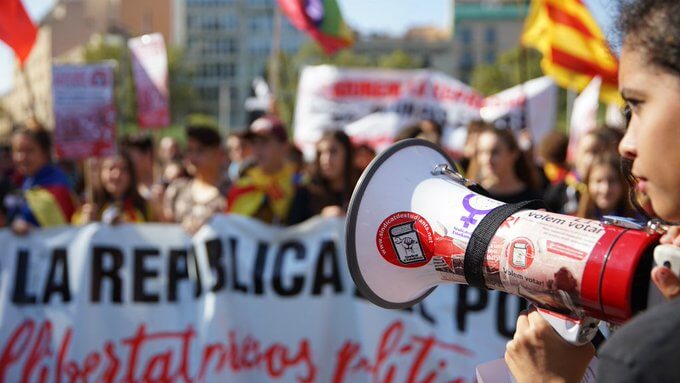 Catalonia is holding a general strike today, Friday 18 October, in protest at the guilty verdict of the 2017 referendum leaders, including other demands.

They say the reason for the strike is that their long-standing demands have not yet been met, including a higher minimum wage and equality-promoting measures.

Whilst neither trade union made any explicit mention of the Supreme Court verdict – the law prohibits unions from calling strikes for political reasons – they say they are committed to Catalonia’s national rights, which they also believe affect labour rights.

From early on Friday morning, citizens supporting the protest are blocking several roads including the Catalonia’s two main motorways: AP-7 (in La Jonquera, near the French border) and AP-2 (in Tarrés, in the west).

Some other roads across Catalonia have also been cut off by protestors joining the strike, including N-II, N-340, C-25, C-55, C-14, N-145 and C-12, as well as several key avenues in Barcelona. Some public transport lines are also interrupted.

This Friday is also set to be the fifth day of protests, marches and demonstrations. The strike has already had some impact, including a decrease in the electricity usage, a halt in the production at the SEAT car factory, and the suspension of all sort of events across Catalonia.

In the afternoon, a big demonstration at 5pm will see the five 100-km marches towards Barcelona from several Catalan cities lasting three days converge.

We will be updating this report during the day.

At least 55 flights have been cancelled at Barcelona El Prat airport due to the general strike across Catalonia.

The numbers participating in the Catalan strike: 60-80% in commerce, 90% of university students, 43% in public education, 30% of civil servants, 26.3% in health, and 36% of workers on the metro. According to reports, electricity consumption has fallen across Catalonia over 10% due to the strike.

The Sagrada Família closed its doors as pro-independence supporters brought the demonstrations to its gates.