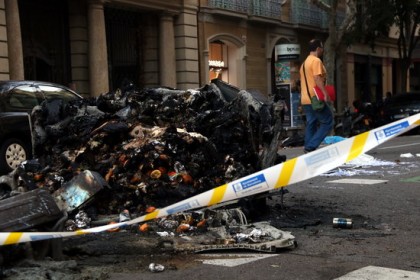 With the fourth night of protests already underway in Barcelona and other Catalan cities over the jailing of nine independence leaders to up to 13 years in prison, the authorities have begun to assess the fallout by releasing figures on the numbers injured and arrested up to Wednesday night.

Catalonia’s ambulance service, SEM, said on Thursday that it had attended to a total of 346 people injured since Monday, including both protestors and police officers. Of those, 131 received medical attention on Monday, 119 on Tuesday, and 96 on Wednesday.

More than a hundred of those who required an ambulance on Monday – the day the Supreme Court sentenced the Catalan leaders to prison – were at the protest that brought Barcelona El Prat airport to a standstill.

Whilst protestors and police officers have been injured in the unrest in places around Catalonia, the majority have been in Barcelona. 57 needed treatment on Wednesday in the Catalan capital, after 37 people were seen to the night before.

In other Catalan cities and towns, the numbers of injuries were on a smaller scale. For example, on Wednesday, some nine people needed medical attention in Girona, 14 in Manresa, 12 in Lleida and two in Tarragona.

A number of journalists have also been injured covering the unrest. On Thursday, the Mèdia.cat watchdog said that 21 reporters have been injured around Catalonia since the protests began on Monday. Nine were injured in Barcelona alone on Wednesday.

Over a hundred people arrested

Meanwhile, Spain’s Interior Ministry on Thursday put the number of people arrested during the disturbances at 101. On Wednesday alone some 52 people were detained, 38 by the Mossos d’Esquadra Catalan police and 14 by the Spanish National police.

As with the injuries caused in the unrest, most of the arrests – over a dozen on Wednesday – took place in Barcelona, although there were a number of detentions in single figures in other places, such as Lleida, Tarragona, Girona, Manresa and Vilanova i la Geltrú.

The ministry also gave information about the number of police officers injured in the protests, putting the number since Monday at 194. According to the figures on Wednesday alone, some 35 Mossos officers were injured and 11 Spanish National police officers.

The unrest has also led to plenty of damage in the places where the protests have taken place, especially in terms of communal rubbish containers that protestors have set on fire to act as barricades in the streets.

On Thursday, for example, the Barcelona City Council said that some 400 plastic containers had been burnt in the city on Wednesday night, at an estimated cost of 500,000 euros. Meanwhile, the fire service said it had put out 160 burning barricades and vehicles.

Elsewhere, the Tarragona authorities estimated that the damage caused to rubbish containers in the city amounted to some 150,000 euros, whilst the Lleida council put the cost to their city at 80,000 euros.

Meanwhile, Thursday brought a fourth day of protests around Catalonia, as the pro-independence marches across the country continued for a second day, a number of roads were blocked, and students carried out another day of strikes and demonstrations.

These disruptions have led Catalonia’s largest factory, the SEAT car-manufacturing plant in Martorell, to announce it will shut down production on Thursday and Friday as it cannot guarantee the arrival of workers and materials.

Thousands of pro-independence supporters continued the so-called Marches for Freedom, with five columns of demonstrators setting out from different Catalan towns on their way towards Barcelona, bringing traffic to a halt on some major highways.

Meanwhile, some of Barcelona’s main avenues in the city centre were also closed after last night’s unrest.

Also in the Catalan capital, hundreds of university students blocked streets as they began congregating in the morning for a demonstration called at midday by a students’ union in Plaça Universitat square.

In the northern capital of Girona, too, university and secondary school students demonstrated, with hundreds gathered in front of the Catalan government’s headquarters in the city to condemn the jailing of Catalan leaders.