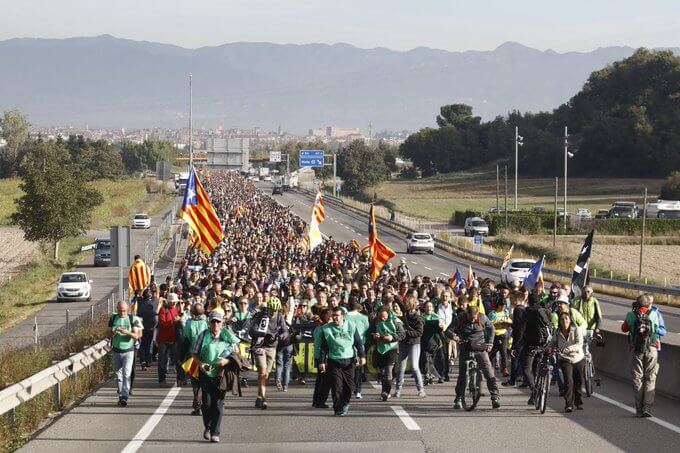 Five 100km-long marches started early in the morning from different towns in Catalonia on Wednesday, which are expected to converge and culminate in a major rally in Barcelona on Friday.

It is the third day of protests against the imprisoned Catalan political leaders after the Supreme Court sentences were issued on Monday morning. Student unions have also called for a 3-day strike starting today.

10,000 participants set off this morning from the central Catalan city of Vic, 7,000 from Girona, 2,000 from Tàrrega, 1,000 from Tarragona, and nearly 1,000 from Berga. Several relatives of the imprisoned and exiled Catalan leaders are also taking part in the initiative.

Major disruptions and closures of several main roads in Catalonia that connect with Barcelona will occur, such as the A-2, C-16, N-340, C-31 and AP-7.

Protestors of all ages set off from Tàrrega at the earliest hour of all of the marches, at 7am from the ‘Plaça del Carme.’ Three lanes of the A-2 towards Barcelona will be closed.

The march from Tarragona began at 7.30am at Palmeres avenue, including pro-independence politicians. The Mayor of Tarragona Pau Ricomà was among those marching, as well as the Catalan territory adviser Damià Calvet.

Nearly 1,000 people set off from northern Catalan city of Berga at 8am from the ‘Plaça Guernika’, and are heading along the C-66. Protestors are carrying signs demanding the freedom of the political leaders and demanding independence. A few tractors are at the back of the march.

At 9am, hundreds of people from northern city Vic set off from the ‘Plaça U d’octubre’ with about 20 tractors at the head of the protests. Among those marching are the wife of imprisoned politician Jordi Turull, Blanca Bragulat, the sister of exiled leader Toni Comín, and the wife of former interior minister Joaquim Forn, Laura Masvidal.

A 7,000-strong rally from Girona set off from the ‘Plaça U d’octubre’, including relatives of Dolors Bassa and Carles Puigdemont. Tractors will also drive the march, which will head down the AP-7.

It has been a turbulent few days in Catalonia following the announcement that 9 of the independence leaders behind the 1 October referendum in 2017 would receive jail sentences of between 9 and 13 years.

Monday’s verdict sparked immediate protests on the streets, before pro-independence group Tsunami Democràtic organised mass protests at Barcelona airport, which led to clashes with police, cancelled flights on Monday and Tuesday and damage to the infrastructure.

ALSO READ: Protestors and police clash in Barcelona and other major towns

Although no protests were directly called by Tsunami Democràtic on Tuesday, many roads were closed in various areas of Catalonia in the morning. Peaceful protests continued throughout the day but escalated deep into the night, with more clashes with police and barricades set on fire.

Some of Catalonia’s top officials have since called for protests to be non-violent, amidst fears that Madrid will impose direct rule on Catalonia.

The 9 Catalan leaders sentenced to prison for sedition have also sent out a joint tweet calling for peaceful protests: ‘We support massive, peaceful demonstrations and marches. No kind of violence represents us.’