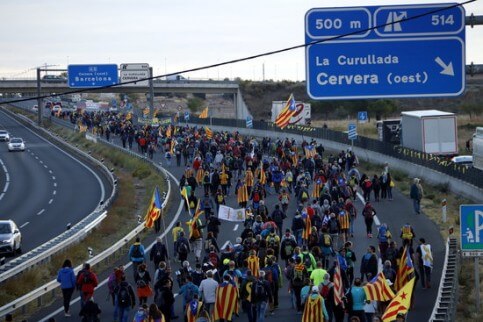 Catalonia has entered its third day of protests on Wednesday, as pro-independence supporters continue to demonstrate against the sentencing of 9 Catalan leaders for sedition.

After a night of unrest across the country, which left 30 arrested and at least 130 people injured, five 100km-long marches have started early in the morning in different towns, which are expected to converge and culminate in a major rally in Barcelona on Friday. Student unions have called for a 3-day strike starting today.

Catalan president Quim Torra called an urgent meeting with his top ministers on Wednesday morning, amid warnings that the unrest could prompt Madrid to impose direct rule on Catalonia.

Meanwhile, Spain’s acting prime minister Pedro Sánchez called separate meetings with the heads of the main parties in the Spanish Congress to discuss the situation of Catalonia.

A statement was issued by the Spanish government on Tuesday night stating that ‘a minority seeks to impose violence on the streets of Catalan cities, particularly in Barcelona, Tarragona, Girona and Lleida.’

‘It is clear that we are not faced with a peaceful civic movement,’ the statement added, ‘but coordinated acts by groups using violence on the streets to break the co-existence in Catalonia.’

It concluded by saying that the government will ‘guarantee the security and co-existence in Catalonia, and will do so with a commitment to firmness and unity’.

Barcelona mayor Ada Colau described Tuesday night’s scenes in the city centre as ‘unacceptable’, as they ‘put citizens at risk’. She asked all institutions to ‘call for calm’ and ‘unanimously reject’ the use of fire barricades: ‘We are a city of peace and dialogue.’

Protestors and police clash in Barcelona and other major towns