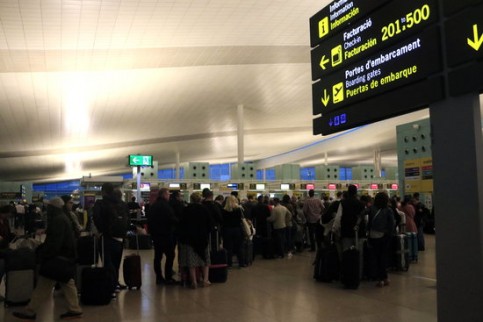 Passengers at Barcelona El Prat airport are once again left without a flight on Tuesday with 45 more flights cancelled in the aftermath of the chaotic scenes at the airport on Monday.

Monday saw over 100 flights cancelled after pro-independence organisation ‘Tsunami Democràtic‘ urged campaigners to blockade the airport in a condemnation of the verdict to the Catalan trial, in which 9 pro-independence leaders were convicted to lengthy jail sentences of between 9 and 13 years.

Reports suggest on Tuesday that it is just departures that are affected at the airport, and all flights arriving at Barcelona are set to go ahead.

There were still disruptions on Tuesday morning elsewhere in Catalonia, with road and train line closures due to more small-scale rallies. In the early morning, main roads the C-12, C-25, C-17, C-65, C-66, N-11, N-141 were all closed due to demonstrations, as well as train lines in the early hours of the morning including the high-speed link from Barcelona to Figueres near the French border, the RG1, R1 and R11 all of which have now been reopened.

Monday had also seen all routes to the airport temporarily cut off to prevent protestors reaching it, with many travelling several kilometres on foot to partake.