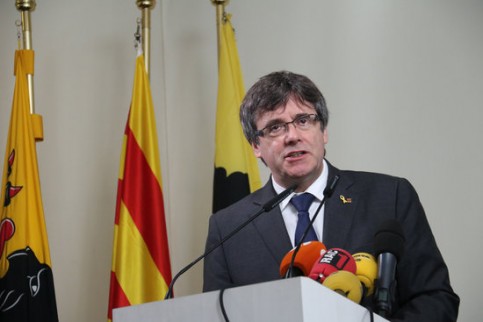 Convicting the Catalan leaders is the same as condemning ‘more than two million people’, said former Catalan president Carles Puigdemont, in a news conference on Monday in Belgium, where he is in exile, and giving his reaction to the Supreme Court’s decision to jail the pro-independence leaders.

Calling the prison sentences of between nine and 13 years handed down to the leaders for organising the 2017 independence referendum ‘unfair’ and ‘inhumane’, Puigdemont added that ‘no propaganda campaign can cover up so much shame’.

The former president, who left for Belgium following the 2017 independence bid and so avoided arrest, said the convictions should be condemned ‘around the world as many times as necessary’, and he claimed his former colleagues’ political rights had been infringed.

Puigdemont said pro-independence supporters ‘must react’, and he urged them to give ‘a response at the ballot box’, in reference to the 10 November general election. ‘Let’s respond stronger than ever,’ he said, adding that ‘the only possible solution is democracy’.

Yet, the former president made no mention of the European arrest warrant for him that the Supreme Court issued earlier in the day. Spain has already tried to extradite him on two occasions, most recently in July 2018, when Germany turned the request down.