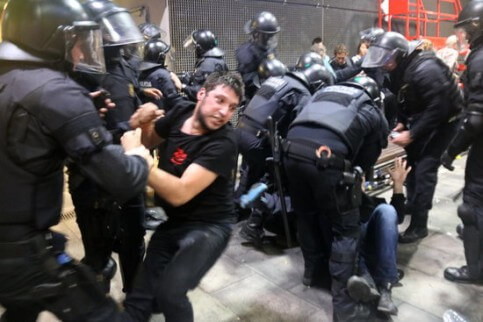 A man has lost an eye after being injured during Monday’s clashes between police and pro-independence protestors at Barcelona El Prat airport. Doctors believe the injury is likely to have been caused by a rubber bullet.

The victim was rushed to Bellvitge Hospital, not far from Barcelona airport, with ‘multiple facial injuries’. According to the hospital, the injury was ‘consistent with the impact of a rubber bullet’. Agents from both the Spanish National Police and the Catalan Mossos d’Esquadra were deployed at the airport.

Thousands of Catalan pro-independence supporters hit the streets in protest and blocked access to Barcelona airport on Monday, very soon after Spain’s Supreme Court sentenced nine of their leaders to jail terms of up to 13 years over the failed 2017 independence bid.

As soon as the sentences were announced, protestors flooded onto the streets of Barcelona before marching towards El Prat, where they blocked off the road and rail access.

ALSO READ: The man who lost an eye from a rubber bullet during Catalan referendum

The airport protest was organised via an anonymous group of some 200,000 followers on Instagram under the slogan Tsunami Democràtic, who called on protestors to move from the centre of Barcelona towards the airport at around 1pm.

Within minutes, all public transport and private vehicle routes to the airport were already flooded with people. The police ordered the interruption of train and underground services – but this did not prevent protestors from reaching the area.

At the entrance to the airport, police in riot gear charged at protestors trying to get inside. Demonstrators responded by throwing rocks, cans and fire extinguishers.

At one point, traffic outside came to a complete standstill up to five kilometres from the airport approach, with many travellers with suitcases getting out of cars and walking as police helicopters flew overhead.

Spain’s airport authority AENA said that 108 flights had been cancelled on Monday. It was reported that a further 45 flights were cancelled on Tuesday morning. Police arrested one protestor at the airport while 53 people were injured.

The airport protest was called off at around 10pm on Monday. Shortly afterwards most of the demonstrators had gone, but only after hours of clashes with the Catalan and Spanish police.

In total, 131 protestors and 47 police officers were treated for injuries across Catalonia on Monday, most of them at Barcelona’s airport.