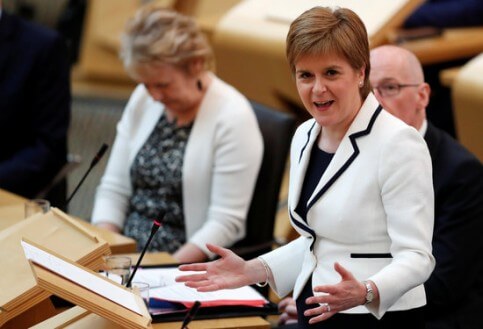 Nicola Sturgeon, Scotland’s First Minister, described the conviction of the Catalan independence leaders as a  ‘dreadful outcome’, adding: ‘These politicians have been jailed for seeking to allow the people of Catalonia to peacefully choose their own future.’

Responding to the news of Monday’s convictions on Twitter, Sturgeon added: ‘Any political system that leads to such a dreadful outcome needs urgent change. My thoughts and solidarity are with all of them and their families.’

As for the European Union‘s response, the EU Commission made an official statement saying it ‘fully respects’ the Supreme Court verdict, but also stressing that the right to peacefully protest ‘is guaranteed all across Europe’.

These politicians have been jailed for seeking to allow the people of Catalonia to peacefully choose their own future. Any political system that leads to such a dreadful outcome needs urgent change. My thoughts and solidarity are with all of them and their families. https://t.co/OSaknVGzYY

Aamer Anwar, the Scottish lawyer of exiled former minister, Clara Ponsatí, called for the ‘immediate release of the imprisoned people and the free return of those exiled,’ on Twitter, and detailed the sentences of each of those convicted.

The European Greens called the sentences “disproportionate,” and the party’s head, German MEP Ska Keller, predicted that the convictions “will only deepen the crisis,” adding that a political solution “can’t happen with political leaders imprisoned.”

Finnish MP, Mikko Kärnä, called the leaders ‘political prisoners’ who have been ‘jailed for defending democracy’. Calling for the EU to impose sanctions on Spain, Kärnä also said that next week ‘I will submit a motion to the Finnish Parliament for your recognition.’

Also on Twitter, the former Greek finance minister, Yannis Vaorufakis, was critical of the convictions, saying: ‘The rest of us must rise up against politicians being sentenced to long prison stretches in the heart of Europe for pursuing political agendas mandated by voters.’