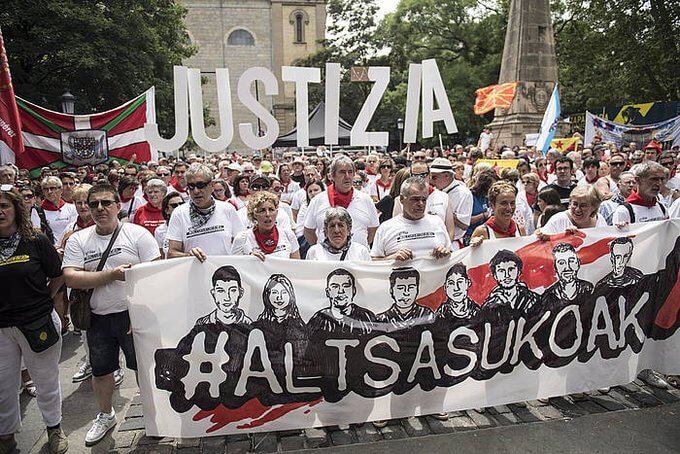 Eight young people in Altsasu, Navarra, have been sentenced to up to nine and a half years in jail for a bar brawl with two Spanish police officers in October 2016.

The group were facing prison sentences of up to 13 years, but Spain’s Supreme Court lowered the terms on Wednesday.

Whilst the ruling is final and so must be carried out, the defence teams might take the case to Spain’s Constitutional Court.

The judges of the same court that has to make a decision on the fate of the 2017 Catalan referendum leaders removed ‘discrimination’ as an aggravating circumstance, after deciding there was no ideological motive for the incidents.

Yet, the offences of attack on authority, causing injuries, and public disorder were upheld by the judges.

One of the eight convicted individuals is a woman, and was the only one who did not face preventive detention at any time. Her revised sentence is also the lowest, dropping from two to one and a half years.

Three of the eight youths have already spent more than 1,000 days in prison whilst waiting for the final ruling on the case. The other four are also now in preventive detention, but have not been behind bars for the whole process.

Some 60,000 people demonstrated in Altsasu in support of the young people involved in the case to coincide with the 1,000 days spent in pre-trial jail. They have also been supported all along by the whole Catalan pro-independence camp. Some have linked their case with that of Catalonia’s jailed political leaders, calling both cases part of ‘repression’ by Spain’s authorities.

The case became especially well-known because Spain’s prosecutor accused the young people of terrorism, which sparked harsh reactions from human rights groups, such as Amnesty International.