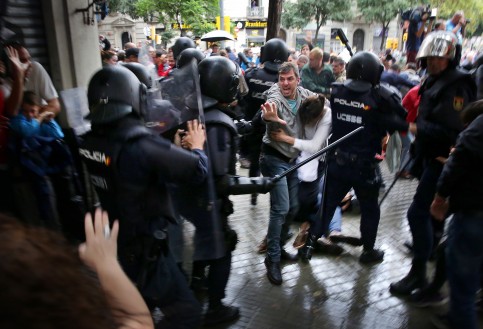 Organisations representing lawyers and victims of police violence during the Catalan independence referendum on 1 October 2017, have filed a lawsuit in Spain’s National Court alleging crimes against humanity by the former leadership of the Spanish National Police and Guardia Civil, as well as interior ministry officials.

The lawsuit describes the operation to halt the vote designed by ministry and police officials as a ‘systematic and planned attack’ aimed to produce ‘injury and torture’ directed at the civilian population for political and ideological purposes. The lawsuit has also been filed with the International Criminal Court in The Hague should the National Court dismiss the case.

The Athens Association of Jurists for Civil Rights, the Catalan Association of People Affected by the Events of 1 October, and the Association of Lawyers for Democracy of Lleida, together with nine individuals injured by police conduct, announced the lawsuit during an event at Catalonia’s College of Journalists on Thursday.

Among those named in the suit is the former state secretary José Antonio Nieto, the former Guardia Civil colonel and head of the police operation Diego Pérez de los Cobos, the former heads of Spain’s National Police in Catalonia Sebastián Trapote and Ángel Gonzalo, and the Spanish government’s former delegate to Catalonia Enric Millo.

The lawsuit demands that the former officials be taken into custody while they are investigated for a number of crimes against humanity, which carry prison sentences of up to 15 years. The offences with which the former officials are charged have no statute of limitations and do not allow for a defence based on the grounds of political or police immunity.

The organisations behind the lawsuit also pointed out that the UN and the Council of Europe have both called on the Spanish authorities to launch an internal investigation into the conduct of Spanish police officers on the day of the referendum, but that so far no such investigation has been carried out.