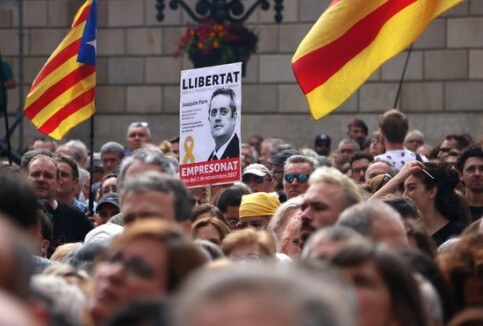 Catalan pro-independence parties are not giving up on their attempt to have their leaders running in the upcoming Spanish general election on 10 November – even if they are held behind bars and the upcoming verdict of their trial could thwart any chances of them taking office.

Junts per Catalunya (JxCat), the party led by the exiled former Catalan president Carles Puigdemont from Belgium, is planning to put forward at least two of their jailed politicians as candidates for the Spanish Congress.

A former minister in Puigdemont’s pro-independence government, Joaquim Forn has been confirmed as the leading candidate for the Northern region of Girona.

He’s been in pre-trial detention for almost two years as one of the 12 politicians and activists tried at Spain’s Supreme Court for calling a referendum and declaring independence in the fall of 2017.

With nine of the accused facing rebellion charges for allegedly leading a violent coup d’état, a guilty verdict could carry prison sentences of up to 25 years – as well as a ban on holding any public office.

Whilst Forn and other pro-independence leaders were allowed to run in a string of elections last spring despite being in prison, with some temporarily leaving jail to attend their inauguration as MPs, the looming verdict makes it unlikely that they still preserve their right to hold a public office by the general election on 10 November.

JxCat has also hinted at the possibility of having activist Jordi Sànchez run again as their leading candidate for the Barcelona region. Imprisoned on 16 October 2017, he was then the president of the pro-independence Catalan National Assembly (ANC), and has since become one of the most respected figures in Puigdemont’s party.