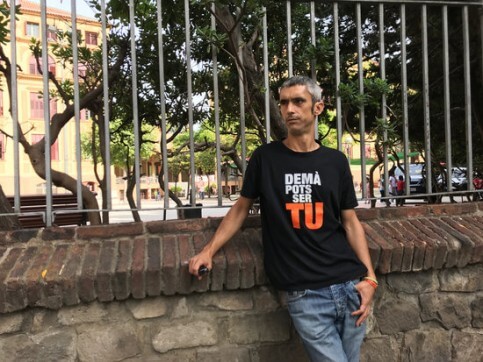 On 1 October 2017, Roger Español woke up as one of the two million-plus Catalans vowing to vote in a referendum on independence deemed illegal by the Spanish authorities. When the day ended, he had lost his right eye to a rubber bullet, as well as the opportunity to cast his ballot.

‘They also took that away from me,’ he says.

Two years on, Español has become a symbol of the 1 October referendum, and his blind eye a reminder of the police operation that left hundreds of voters injured whilst trying to stop the vote.

Standing in front of the Ramon Llull school in Barcelona, where he lost his eye, he spoke about his memories from that day.

‘I don’t know how many rubber bullets the police shot, but there were a lot of them. And many were unnecessary,’ he says. ‘A police officer shot a rubber bullet less than 15 metres away and caused my injury.’

That instant had far-reaching consequences for him, which extended well beyond dealing with a physical recovery.

Español is currently embroiled in a judicial process examining that day’s police operation, and his defence team has recently presented evidence revealing who the police officer behind the rubber bullet shot that blinded him was.

‘We’ve discovered who the rifleman was, which means that we can prove that some policemen lied in their testimonies even though they were under oath, so the pre-trial phase will go on a bit longer,’ he says.

Español hopes that his case, being tried in a Barcelona court, will serve to seek accountability for a police operation that he believes ‘should never happen again’.

‘The operation should have been as professional as possible, but their ‘Go get them’ chants, the fact that they spent so many days inside a ship made it a personal matter for [Spanish police officers], which shouldn’t have ever been the case for a police operation,’ says Español.

But the outcome of the trial could be less convenient for Español, as he is sitting both as an accuser and an accused.

Prosecutors request a 2.5-year sentence for Español for allegedly throwing metal barriers at police officers, which they see as an attack on authorities.

Español claims that he moved the barriers to block the way for police officers, but never intended to hurt them.

He sees his case and the charges he faces as part of a broader effort by Spanish authorities to crack down on the independence movement. ‘I recovered, leaving my studies and losing a job, but I still need to be careful with what I do, with whom, and where. That’s what they want, right? For you to censor yourself.’

Cs party file motion of no confidence against Catalan president