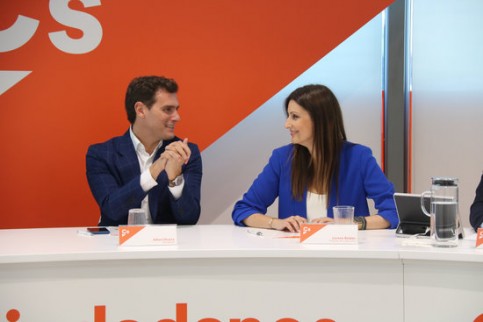 The Ciudadanos (Cs) party has filed a motion of no confidence in the Catalan Parliament against the Catalan president, Quim Torra. The vote will take place on Monday 7 October.

The party’s head in Catalonia, Lorena Roldán, argued on Monday that Torra is ‘a danger’ due to his alleged ties to the pro-independence activists arrested last Monday.

It was reported in the Spanish media that Anna Puigdemont, the sister of the former Catalan president Carles Puigdemont, held a meeting in 2018 with five of the pro-independence activists sent to preventive detention last week with terrorism charges.

According to the same report, the meeting was ‘secret’ and aimed to ‘hand over sensitive documents and set up secure communications’ between Carles Puigdemont and his successor as Catalan president, Quim Torra, through the former president’s sister and the activists.

Yet Ciudadanos (Cs) not only announced that Catalan president Torra will face a motion of no confidence, but they will take him to the public prosecutor for his supposed links with the jailed activists.

‘This is a motion of no confidence in favour of co-existence,’ said Roldán.

Quim Torra’s post as Catalan president is, so far, not on the line – the only other party open to supporting the motion in Catalonia is the People’s Party (PP), but the both parties’ MPs fall short of forming a majority.

Even if the other explicitly unionist group in the chamber, the Catalan Socialists (PSC), agreed on the move, the Cs party would still need more parties to succeed. All three hold 57 seats, while 68 are needed for a majority.

So far, a Socialist spokesman has called the motion ‘a gesture’, but did not rule out their support for it.

Meanwhile, the four groups in favour of a Catalan referendum have already said ‘No’ to Cs’ proposal, ruling out any chances of it succeeding.

Focus: two years since the referendum in Catalonia