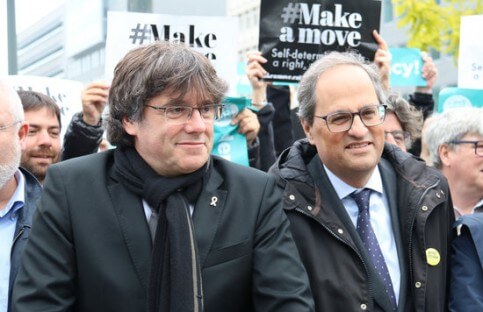 Carles Puigdemont, the former Catalan president, has suggested that the Spanish Judiciary is trying to embroil him in terrorism allegations in order to persuade Belgium to extradite him after the failure of two European arrest warrants issued by Madrid.

‘This is lawfare taken to its limits: from rebels to terrorists in order to try to manipulate, again, the European arrest warrant procedure. They will fail again,’ he tweeted. ‘Because all they will find is that we continue as we always have: with democracy, civility and non-violence.’

Puigdemont’s comments came as a reaction to Spanish media reports claiming the former president’s sister, Anna Puigdemont, held a meeting with five of the CDR (Committees in Defence of the Republic) pro-independence activists provisionally jailed last week on terrorism allegations.

Reports in the media claim that this supposed meeting is part of the judicial investigation into the seven activists now behind bars, and is mentioned in the judge’s decree ordering their imprisonment, which has not been officially released.

According to the same report, the meeting was ‘secret’ and aimed to ‘hand over sensitive documents and set up secure communications’ between Carles Puigdemont and his successor as Catalan president, Quim Torra, through the former’s sister and the activists.

While the case is under a gag order, several leaks from the investigation have been released in Spanish media outlets in the past few days.

Anna Puigdemont also reacted to the news by flatly denying that the alleged meeting on 15 September 2018 had ever taken place.

‘It is physically impossible that I took part in that meeting for family reasons, which are perfectly accredited and documented,’ she said in a statement.

Anna Puigdemont also went on to deny ever having been a go-between for her brother and Torra, and she called the allegations ‘a campaign to criminalise and discredit’.

‘We have always contemplated this desire [for independence] and fight with the absolute commitment to democratic, civic and peaceful paths,’ she added on Monday morning.

Also on Monday, the Catalan parliament speaker, Roger Torrent, called the media reports ‘absolutely outlandish leaks’ and sided against calls for the president to appear in the Catalan chamber to discuss the issue.

On the other side of the political spectrum, the People’s Party (PP) leader, Pablo Casado, called on Spain’s acting prime minister, Pedro Sánchez, to enforce the national security law in Catalonia ‘today’.

For Casado, ‘the Catalan government was involved in preparing possible attacks through CESICAT (Centre for Information Security of Catalonia), which he says should not exist because ‘it is illegal for a region to have an intelligence agency’.

Meanwhile, the Ciudadanos (Cs) party leader in Catalonia, Lorena Roldán, is planning to present a motion of no confidence against Quim Torra.

As for the leader of the far-right Vox party, Santiago Abascal, he has announced a lawsuit against Torra, following ‘the serious news in the past few days about his relationship with the CDR terrorists,’ and he demanded the ‘immediate preventive detention’ of the president.

Focus: two years since the referendum in Catalonia