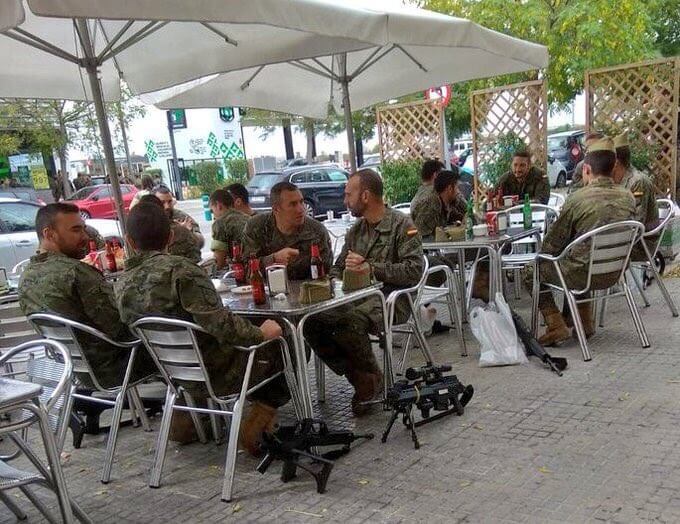 Images of a group of Spanish soldiers in uniform shopping in a supermarket and enjoying a drink at a sidewalk café in the town centre of Vilafranca del Penedès (with their weapons on the ground alongside them) went viral on social media over the weekend.

Sources in the armed forces confirmed that the group of soldiers belong to the Spanish Legion, who were returning from a training operation in northern France. The army, which says it will open an investigation into the incident, said the soldiers were returning to Malaga by bus, which stopped in order to change drivers in Vilafranca, in the heart of Catalonia’s wine-growing Penedès region south of Barcelona.

What caused so much attention about the images was that the soldiers are seen drinking beer and carrying their weapons with them. However, the armed forces said that in such cases they ensure that the weapons are never loaded.

However, that explanation did not satisfy the local authorities in Vilafranca, which have demanded explanations. Meanwhile, the left-wing Esquerra Republicana (ERC) and CUP parties reacted by demanding that the Spanish armed forces leave Catalonia.

Yet, the unionist Ciudadanos (Cs) party insisted that the army ‘should not have to ask permission to go where it wants in its own country,’ referring to the incident as ‘normal’ and expressing surprise that it should cause such ‘hysteria’.

When the images first appeared online, rumours quickly spread that the group were not real soldiers, but rather a bachelor party dressed up in uniform and carrying airsoft or paintball weapons. However, the statements by the Legion later confirmed the group as soldiers.