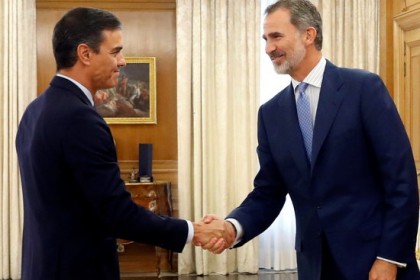 Spain braces itself for even greater political instability. Acting prime minister Pedro Sánchez has announced a new general election on 10 November – the fourth in four years – after failing to garner enough parliamentary support to renew his government.

‘There’s no parliamentary majority in the Spanish Congress that allows for the formation of a new government,’ Sánchez said at a press conference on Tuesday night, blaming other parties for not backing his bid. ‘I tried to do it, but they made it impossible.’

Sánchez’s criticism was aimed both to his left, at Podemos, and to his right, at the People’s Party (PP) and Ciudadanos (Cs): ‘For the Spanish government to not depend on [Catalan and Basque] pro-independence parties, their abstention was needed.’

Everything seemed set for another Socialist PSOE-led executive when Sánchez won a snap general election last 28 April, with the only doubt being whether anti-austerity Podemos would enter the government or if it would rather offer its support without demanding government posts. After months of negotiations, both parties failed to translate the left-wing parliamentary majority into a left-wing government.

For months, the PSOE and Podemos accused each other of failing to seek compromises while publicly assuring their commitment to coming to an agreement preventing another trip to the polls.

Other parties joined the discussion at the last minute, with Ciudadanos (Cs) leader Albert Rivera offering to abstain if Sánchez promised he would not use his presidential powers to pardon the jailed Catalan independence leaders.

The uncertainty ended on Tuesday evening when Spain’s king Felipe VI confirmed that he would not put forth Sánchez as candidate – a formality required in order to be appointed head of government by lawmakers in Congress.