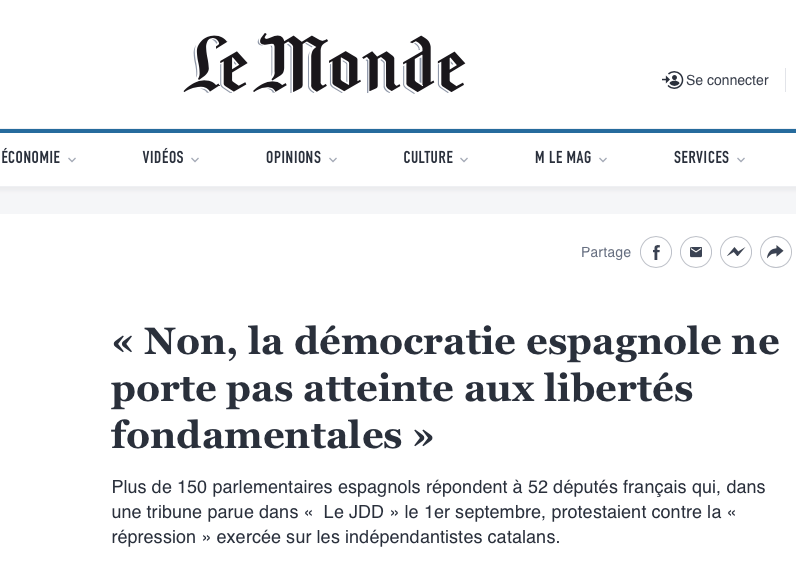 Spain’s right-wing People’s Party (PP) has responded to the 52 French MPs who called for an end to the ‘repression’ of Catalan pro-independence leaders.

In an op-ed published in Le Monde newspaper, 148 MPs, senators and MEPs from the PP call the comments by French politicians ‘very serious and baseless accusations’.

‘The pro-independence leaders have not been tried for their opinions, but because they attacked our fundamental laws, infringing the rights and freedoms of millions of Spaniards, above all those of Catalan citizens,’ the article reads.

The group of French MPs called denying the leaders their freedom ‘an attack on fundamental freedoms and the exercise of democracy’.

‘These elected representatives have been imprisoned and exiled for their political decisions, for wanting to organise a demonstration, and they risk a verdict with harsh prison sentences,’ they added.

However, for the PP officials, ‘Spain’s democracy is of as high a quality as the French one, according to all international organisations.’ They also claim that France would have reacted with the same ‘firmness’ as Spain should Corsica have held an ‘illegal referendum’ and declared independence unilaterally.

In this event, they say, the Spanish People’s Party ‘would undoubtedly back France in the defense of its democracy, constitution and unity.’

The op-ed in Le Monde published on Catalonia’s National Day (La Diada) is signed by the likes of the PP leader, Pablo Casado, and the rest of the party’s MPs, senators and MEPs.

Meanwhile, the French officials who backed the text criticising Spain’s democracy include the head of far-left La France Insoumise, Jean-Luc Mélenchon, and officials from other minor parties, such as the centre-liberal UDI and the Communists. Former French left-wing ministers Marie-George Buffet and Sylvia Pinel were also signatories.