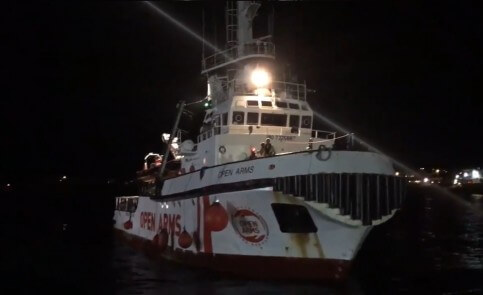 After 19 days stranded in the Mediterranean, the Open Arms rescue ship has finally docked in the port of Lampedusa with 83 people aboard, following orders from Italian authorities.

The public prosecutor in the Agrigento region, Luigi Patronaggio, decided to evacuate all the people on board and seize the Catalan NGO’s boat over health concerns.

Dozens of migrants were evacuated from the stranded ship in previous days, and some jumped off the boat trying to swim towards Lampedusa.

The ship docked in Lampedusa around 11:40pm on Tuesday, thus putting an end to a crisis triggered by Italy’s interior minister, Matteo Salvini, who rejected letting sea rescue NGOs disembark migrants on the country’s ports.

‘After 19 days, we’re disembarking in Lampedusa today. Our ship will be temporarily seized, but it’s a price that @openarms_fund is willing to pay in order to guarantee the safety of the people aboard, who will be taken care of. Prioritizing their health and safety in this humanitarian crisis is indispensable,’ said Oscar Camps, the NGO founder via Twitter.

Patronaggio’s decision was announced shortly after Spain sent an army ship to evacuate the rescued migrants, as the NGO refused Madrid’s offer for a safe harbour in the Balearic Islands, more than 3 days away.