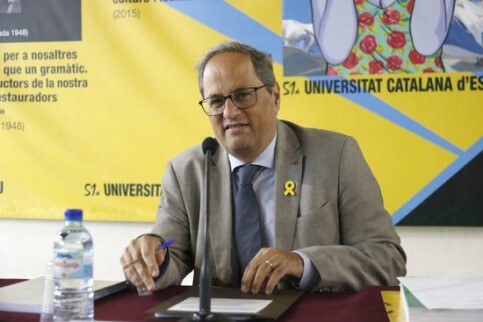 Catalan president Quim Torra has stressed that ‘confrontation’ with Spain is the only plausible way to achieve Catalan independence, thus demonstrating the cracks between the Catalan pro-independence parties’ strategies to attain their objective.

Torra’s remarks on Tuesday came only a day after the former Catalan vice president and leader of the Esquerra Republicana (ERC) party Oriol Junqueras said in a radio interview that the Catalan crisis should be solved through ‘dialogue’.

Imprisoned for his role in the 2017 independence push, when the Catalan government held a referendum and declared independence despite Spain’s opposition, Junqueras has steadily distanced his party from the most belligerent political approach defended by Junts per Catalunya (JxCat), led by Torra and former Catalan president Carles Puigdemont, exiled in Belgium.

‘We must take risks, big risks, if we want the project of Catalan independence to succeed,’ said Torra, who was elected president after most pro-independence leaders were either imprisoned or left the country in 2017.

With Junqueras and eight other leaders awaiting a verdict behind bars, pro-independence parties have not made public how will they react to the prospect of lengthy prison sentences.

With ERC polling ahead of JxCat in recent surveys, Junqueras said that ‘the prospect of a snap election shouldn’t be ruled out.’ Yet, Torra has dismissed the possibility of calling fresh polls in Catalonia.

Despite recent political rows between pro-independence parties, Torra has made the umpteenth call for unity to face ‘repression’ from Spain.

On trial for not removing symbols deemed as partisan from the government headquarters during an election period, Torra faces disobedience charges and could be banned from public office. “They can fine me as many times as they please, they can take me to court, or try to ban me from office, but I won’t give up and I’ll always prioritize the defense of democracy.”