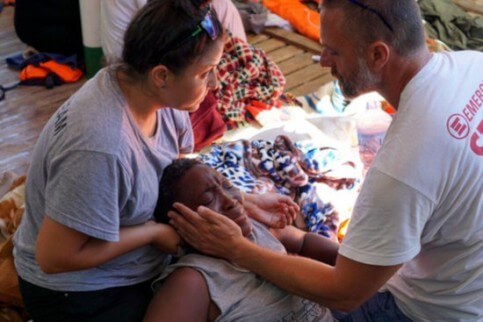 With over 100 migrants still stranded for now 19 days in the Mediterranean, Open Arms has called the situation aboard its rescue ship ‘critical’ and demanded to be able to disembark in the closest port on the island of Lampedusa, Italy.

Eight people were evacuated at dawn on Tuesday from the ship for medical reasons, whilst one of the passengers on board jumped into the sea in an attempt to swim to the island of Lampedusa, which is about 800 metres from the ship.

‘Their health conditions are critical, their safety is at risk,’ said Oscar Camps, the founder of the Catalan NGO. ‘If the worst happens, Europe and [Italy’s interior minister Matteo] Salvini will be responsible.’

While Italian ports remain closed for the NGO, Camps also criticised the Spanish government offering a safe harbour only on Sunday.

‘With our ship 800 metres off Lampedusa, European governments are asking a small NGO to face a thousand extra miles and three more days sailing with adverse weather conditions, with 107 exhausted people aboard after 18 days’ said Open Arms in a press release.

On Tuesday morning, Vincent Cochetel, special envoy for the UN Refugee Agency (UNHCR), tweeted: ‘Quick disembarkation (whoever is on board) to the closest safe port if not just a humanitarian imperative, it is also a legal obligation under international maritime law.’

Spain’s acting deputy prime minister Carmen Calvo played down the NGO’s concerns and said that the rescue ship should be able to travel to a port in the Balearic Islands ‘without any problems’.