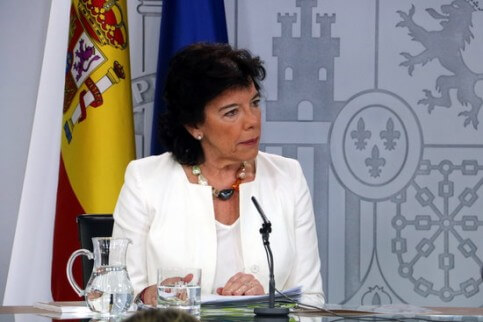 In his efforts to find support for his bid to officially become reinstated as Spanish prime minister, Pedro Sánchez has said on a number of occasions that he does not want to ‘depend’ on the Catalan pro-independence parties in the Spanish Congress, instead calling on the right wing People’s Party (PP) and the Ciudadanos (Cs) to abstain.

Yet, the acting government spokeswoman, Isabel Celaá, clarified on Friday that despite Sánchez’s reluctance to ask for the votes of the Catalan parties – which in return want discussions on a self-determination referendum – the Socialists (PSOE) are willing to talk with them.

‘We don’t want to depend on them, but that does not mean that we can’t talk to them,’ said Celaá.

Earlier this week, sources in the PSOE party confirmed that Sánchez would not sit down with the Esquerra Republicana (ERC) and Junts per Catalunya (JxCat) parties, and instead would leave any discussions to the party’s spokeswoman in congress, Adriana Lastra.

After the failure to get Sánchez elected Spanish prime minister at the end of July, the Socialists will talk to civil society organisations at the end of August, and then begin contacting political parties in their search for enough support to form a ‘progressive government’.

Yet, Sánchez will only personally meet with the left-wing Podemos party, and the right-wing PP and Cs parties (even though the leader of the latter, Albert Rivera, has already said he will not attend), as well as with the head of the Basque PNB party.

On Friday, Celaá was unwilling to go into any detail about what might be discussed in these meetings, limiting herself to saying: ‘The [acting] president has said that they will talk about everything.’

The spokeswoman also again urged the PP and Cs parties to abstain in the vote in congress to elect the Socialist leader prime minister. ‘It is not about gifting Sánchez a government, but rather giving Spain what it needs and what Spaniards decided,’ she said.

Celaá also said that her party hopes the situation can be resolved in September, with a new government as soon as possible, as there will be ‘difficult issues’ to deal with in the autumn, such as the verdict on Catalan independence leaders tried in the Supreme Court.

Pujol family accused of ‘hiding’ funds for acquaintances in Andorra