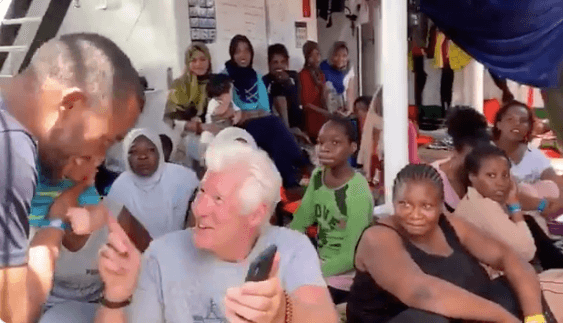 Hollywood actor Richard Gere boarded the Proactiva Open Arms migrant rescue ship that has been stuck in the Mediterranean Sea for over a week, in the middle of an on-going immigration debate in which the president of the European Parliament, David Sassoli has now also called for ‘urgent action’.

The American actor took food and supplies by boat to 121 people aboard the Open Arms, a Catalan NGO rescue ship floating in international waters near the Italian island of Lampedusa – after it has been blocked from entering ports in Italy and Malta.

Richard Gere has a history of human rights activism and often campaigns for environmental issues and AIDS research.

At the same time, David Sassoli, president of the European Parliament, has sent a letter to the EU Commission president, Jean Claude Juncker, asking for ‘urgent action’ to help the 121 migrants on board the rescue ship.

The Open Arms vessel has spent over seven days in the Mediterranean Sea with the migrants on board whilst looking for safe harbour. ‘The situation is serious and deserves prompt action,’ says Sassoli in his letter.

The EU parliament head also asks for an ‘equal redistribution of migrants’, who were rescued off the Libyan coast, and he regretted that neither Italy, or Malta or Spain are willing to take the migrants, which includes 31 children, two of them nine-month-old twins.

In his letter, Sassoli was also highly critical of the union’s member states, warning that if the EU remains ‘indifferent’ to the plight of migrants stranded at sea, ‘it will mean that it has lost its soul, as well as its heart.’

The Catalan NGO, whose ship is now off the Italian island of Lampedusa, thanked Sassoli for his letter and reproached the EU: ‘Shame on Europe, for not being capable of providing a port for these people in eight days,’ it posted on Twitter.

The NGO’s head, Óscar Camps, this week made an appeal to Spain (along with France and Germany), but the Socialist (PSOE) party’s acting Spanish deputy prime minister, Carmen Calvo, said on Wednesday that Spain would not intervene: ‘We don’t have to do it,’ she said.

Meanwhile, Sassoli’s letter comes in the same week that the Italian parliament passed a decree imposing fines of up to a million euros on skippers of ships who rescue people at sea and then take them into Italian waters without permission.