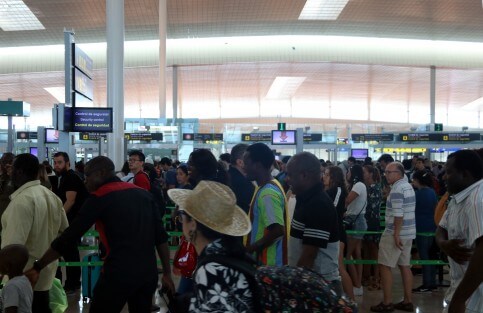 Security workers at Barcelona El Prat airport, who work for the company Trablisa, have rejected their employer’s proposal and have voted in favour of going on an indefinite strike beginning on Friday. The Spanish government has set minimum services at 90%.

As a result, the airport operator Aena has recommended that travellers arrive even earlier than usual for their departures. Aena has also advised passengers to consult check-in desk opening times prior to flights with their carriers, in order to avoid unnecessary lines and overcrowding.

499 workers were called to vote on Thursday to decide if they accepted their company’s offer or not, although turnout is thought to have been much lower due to the fact that many are on vacation, some are on leave, and others did not think the proposal was worth voting on.

According to worker Juan Carlos Giménez, the company’s offer did not imply economic or work improvements for staff, and he also lamented the fact that the head of human resources, Pilar Albacete, stated on Wednesday that it was the staff and not the company that did not want to negotiate.

Some of the workers’ demands included being paid a euro more for overwork, having more changes to deal with overwork, or free parking at the airport.

Travellers that have reserved parking spots may arrive two hours earlier than initially intended and maintain the same fee, but will have to update their arrival times at the ticket desk.

Terminal 2C, from which only Easyjet flies, is not open 24 hours. The facilities will be open from 4 am on Friday, two hours before the first flight.