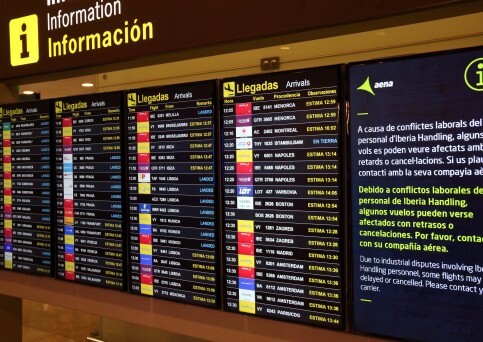 The Spanish government has set the minimum services for the Barcelona airport security and surveillance staff strike at 90% on Tuesday.

The strike is set to begin on Friday 9 August, and will last 24 hours a day, indefinitely.

With the objective of guaranteeing the ‘essential’ security work, the minimum services requirement has been established by a resolution of the delegation of the Spanish government in Barcelona.

The 500 employees called to protest, from the company Trablisa, claim that template rotations to share the toughest jobs are not respected.

Thus, they demand more breaks and personnel rotations to face the increase in workload that, according to them, has been rewarded in recent years with a salary increase of one euro per hour and a free parking space provided.

Airport strikes … why in Barcelona and not Madrid?

Whether it’s air traffic controllers, pilots or baggage handlers, strikes at Spanish airports are common in the busy summer period, and this year in Barcelona airport Iberia ground staff are threatening further industrial action in August. But why in Barcelona and not Madrid?

On the weekend of 28-29 July, Barcelona airport experienced two days of stoppages by the ground staff of Spain’s flagship airline, which along with the complications of a summer storm on the Saturday, led to numerous flights being cancelled and delayed.

The low-cost Vueling airline was forced to cancel 48 flights on Saturday 28 July and another 64 on Sunday 29 July, affecting a total of over 15,000 passengers. Also affected were Iberia, British Airways and Turkish Airlines, which between them had to cancel 31 flights.

The Iberia ground staff are on strike to protest staffing levels, which they say are not keeping pace with the growth of activity at the airport, a lack of permanent contracts, and the ‘indiscriminate’ use of mandatory overtime by Iberia.

With Barcelona airport growing at a rate of 5%, and last year exceeding the 50-million passenger mark, the workers complain there is not enough staff to cover the increased activity, as the Iberia ground staff provide a service for 27 companies.

But that begs the question of why Iberia ground staff are not also striking in Madrid’s Barajas airport. According to the unions, despite Barcelona dealing with a similar number of passengers, Madrid has 1,500 extra workers.

The workload in Barcelona is unsustainable, according to the unions, and they point out that the ground staff in Barcelona had to do 3,500 hours of mandatory overtime last year, while the equivalent staff in Madrid did just 700 hours.

Meanwhile, the Catalan territory minister, Damià Calvet, blames Iberia for provoking the strike by not fulfilling its commitments to Barcelona airport, and he called the difference between how the company handles its staff in Madrid compared to Barcelona ‘brutal and alarming’.