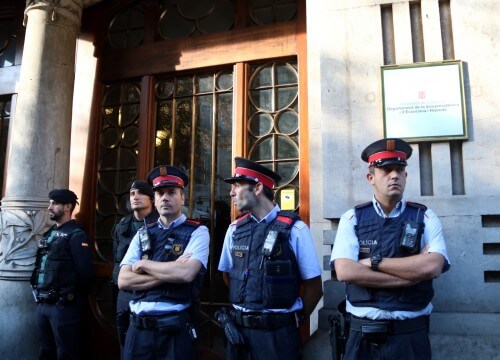 The Spanish National Police made ‘systematic payments’ to some officers of the Catalan police force, the Mossos d’Esquadra, to act as informants on potential links between the police leadership and the government in Catalonia over the 2017 referendum preparations.

This is according to Spanish daily El Mundo, which says that with the data gathered by the informants, the government in Madrid earmarked the Mossos officials to be automatically sacked when Catalonia’s self-rule was suspended, via Article 155.

In fact, as soon as Spain took over Catalonia’s administration in October 2017, several officers were fired, such as Josep Lluís Trapero, the head of the Mossos head. On 20 January 2020, Trapero and other leaders will face trial for rebellion, and he faces up to 11 years in prison.

According to El Mundo, Spain’s home affairs ministry, now run by the Socialist (PSOE) party, has informed the National Court of declassified information on the payments made when the People’s Party (PP) was in charge and Mariano Rajoy was Spain’s prime minister.

The information about this reserve fund was sent to the court ‘mixed together with documents linked to the so-called “Kitchen operation”, in which public funds diverted to spy and steal information from the former People’s Party treasurer Luis Bárcenas is being investigated,’ says the newspaper.

Yet, he also said that the independence camp is not surprised by this type of activity: ‘We know of a lot of attempts to drag us through the mud.’

The Spanish state ‘always ends up resorting to the sewers rather than parliaments,’ he added.