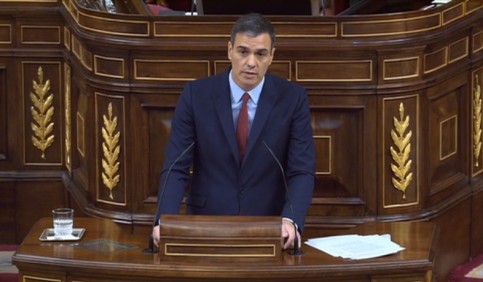 Acting Spanish prime minister Pedro Sánchez began his first attempt on Monday at noon to persuade the Spanish Congress to support his bid to continue in the role, and he made the most of his opening statement to send a clear message against the Catalan independence movement. The speech lasted for two hours.

The Socialist (PSOE) candidate accused the supporters of a Catalan state of ‘going against history’ for its desire to create even more borders within what he believes should be a stronger European Union: ‘What is the point of building more internal borders, when what we have to do is to knock down many external ones?’

He added that in order to contribute to a more greatly united Europe, Spain needs to be ‘united and diverse’.

During his speech he made many references to social issues and highlighted six main points that his potential second term would focus on: employment and pension conditions, the digital revolution, the climate crisis, discrimination against women, socio-economic inequality, and the creation of a more cohesive country within a successful European project.

His statement will be followed from 4pm by statements from all other parties, his replies, and yet a second round of declarations and replies for each group.

The talks with Podemos are key for Sánchez, but not enough by itself, as he will also need at least one Catalan pro-independence party to abstain for him to be sworn in this week.

So far, Junts per Catalunya (JxCat) and the Esquerra Republicana (ERC) party, who share power in Catalonia, have not disclosed which way they intend to vote.

Senior JxCat MP Laura Borràs said before the debate that her party is ‘not very motivated’ to abstain, but is looking forward to knowing what to expect from the potential coalition government regarding the Catalan crisis.

ERC’s deputy president, Pere Aragonès, said his party won’t block Sánchez’s appointment if there is ‘a viable agreement’ with Podemos.