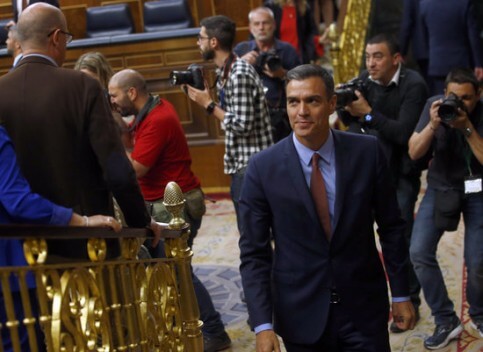 Spain’s acting prime minister, the Socialist (PSOE) Pedro Sánchez, will take his bid to reclaim the post to a vote in the Spanish Congress at the end of July. If he fails, he will have a second chance in September. There will be no third attempt. The next step would be fresh polls in November: the fourth general election in as many years. Here, we try to explain the circumstances that will end up determining the outcome of the current political stalemate.

Yes, but he fell short of a parliamentary majority to rule alone. In Spain (just like in the United Kingdom) voters elect a number of MPs who are then responsible for appointing a new head of government. Seeking parliamentary approval when your party holds an overwhelming majority is a mere formality. When it doesn’t, it becomes a political chess game in which you’re forced to make concessions in order to get the support from political rivals. This is why Sánchez’s investiture is seen as a political gamble: as of today, he still doesn’t know whether his bid will be rejected.

What parties could help Sánchez and the Socialists stay in power?

The right-wing People’s Party (PP), Ciudadanos (Cs), and the far-right Vox party have repeatedly portrayed Sánchez as their political nemesis, accusing him of having secret deals with pro-independence parties and putting Spain’s unity at risk. So it would be quite a political u-turn if they decide to help Sánchez stay in power.

If the right-wing parties are not willing to back a Socialist government, the only options are left-wing Podemos, and Basque and Catalan parties, right?

That’s correct. They are indeed the same parties that helped Sánchez come to power in the first place a year ago, when he ousted the right-wing Mariano Rajoy from power following a corruption scandal. This time, though, Podemos wants something in return for their votes: enter government and have its leader, Pablo Iglesias, sitting in Sánchez’s cabinet as a minister.

Why wouldn’t Sánchez accept Podemos proposal for a coalition government?

Many politicians in the Socialist party are wary of Iglesias, whose aim not long ago was to replace the Socialists as Spain’s main left-wing party. They believe that many voters would not want the party to get too close to Podemos. Moreover, Podemos got poor results in Spain’s recent local elections, so Sánchez believes that they are not in a good position to aim too high in negotiations. Polls also play an important role: if anything, the latest surveys have strengthened the Socialists bargaining power, predicting a stunning 10-point raise in a new election, robbing votes from virtually all its competitors.

The Socialists and Podemos have quite different stances on Catalonia. Is this a barrier in the negotiations?

Definitely. Sánchez recently stated: ‘We have great discrepancies with Podemos, such as how to solve the Catalan crisis. They defend the right to self-determination.’ If the Socialists were to form a coalition cabinet with Podemos, they could face a huge government crisis when the verdict of the Catalan independence trial is announced in the autumn.

Not only is Podemos in favour of an agreed referendum, which the Socialists reject, they’re also against the imprisonment of pro-independence leaders. With the public prosecutor requesting prison sentences of up to 25 years for the crime of rebellion, the Supreme Court verdict will probably not be received the same way in both parties.

What’s the position of Catalan parties?

Just like Sánchez is wary of pro-independence parties, so too do they distrust Sánchez. For many of their supporters, the Socialist party remains that who voted in favour of suspending Catalonia’s self rule (via Article 155) when Mariano Rajoy was in power. Moreover, the Socialist party hasn’t moved an inch regarding pro-independence parties’ main political demand: a referendum on self-determination.

And yet, backing Sánchez is not off the table for either Junts per Catalunya (JxCat) nor the Esquerra Republicana (ERC) party, Catalonia’s two main pro-independence parties, led respectively by former Catalan president Carles Puigdemont, exiled in Belgium, and his vice president Oriol Junqueras, jailed by Spanish courts.

Four politicians from JxCat held behind bars as part of the independence case recently sent a letter to Puigdemont and his successor, president Quim Torra, urging them to allow Sánchez to reclaim his post.

As for ERC, one of its leaders, parliament speaker Roger Torrent, has made the upteempth call for an agreed referendum to back Sánchez: ‘We have no red lines, but nor will we offer a blank cheque.’