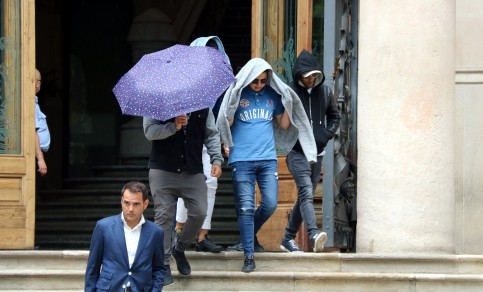 The teenager who was allegedly sexually assaulted in October 2016 in the Catalan city of Manresa, told the Barcelona Regional Court on Monday that the defendants threatened her with a gun, for which she felt intimidated into having sex with them.

She testified that the events, which took place when she was fourteen, happened when she was under the effects of alcohol, marihuana and a substance she believes they placed in her drink, for which there are details of the night in question that she does not remember.

The victim, who is still underage, spoke in court behind a curtain so as not to face the defendants and was accompanied by a psychologist.

Three other key witnesses also testified in court on Monday, including one of her friends.

In this case, the girl’s lawyer demands that the men in question be charged with sexual assault, that is to say, rape, while the public prosecutor is currently seeking a sexual abuse sentence, although that could change following the declarations heard on Monday.

This is similar to what was initially the case with Pamplona‘s infamous ‘wolf pack’, before the Supreme Court overruled the original verdict and sentenced the defendants to 15 years in prison for rape.

The difference between the lower charge of sexual abuse and the more serious charge of assault lies in that assault requires violence and intimidation that is legally inexistent with abuse.

The original verdict in the high-profile Pamplona case sparked major protests all over Spain.

There was a protest in support of the victim outside the court today, organised by the Comitè de Vaga Feminista 8M, with women’s groups planning more demonstrations for Monday evening around Spain and Catalonia. The one in Manresa is due to start at 8pm.

Focus: why Catalonia is key to the investiture of Pedro Sánchez