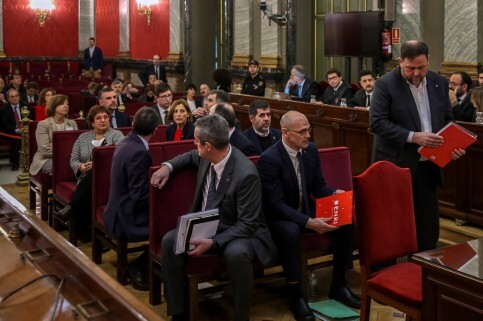 The Spanish Supreme Court has ruled that the nine imprisoned Catalan leaders will have to remain in detention until the verdict is out. It has decided to keep them in prison a week after the end of the trial’s last phase prior to sentencing.

The nine pro-independence politicians and activists have been in jail for their role surrounding the failed 2017 Catalan independence bid, some for more than 20 months whilst awaiting their case’s resolution.

The judges emphasised the need to ‘protect’ the whole proceedings, meaning that they want to make sure that the imprisoned officials do not abscond and that they fulfill their sentences when the verdict is announced.

Regarding the UN Working Group on Arbitrary Detention (WGAD)’s call on the Spanish judiciary to release them, the Supreme Court stated that ‘[their opinion] is not binding’.

Despite acknowledging the influence of such institutions, it says that its report on the issue includes ‘bizarre statements, lacking any common sense and impossible to fit’ in Spain’s courts system.

As for their transfer to Catalonia, the judges said ‘there is no obstacle for this to be made effective’.

All nine spent months in penitentiary centres in the Madrid region immediately after being detained before being granted permission to be transferred to Catalan jails last July.

Yet in February, they were moved back to Madrid to attend the trial sessions.

This means that the seven male jailed officials will return to Lledoners prison, in central Catalonia, while Carme Forcadell will be moved to the Mas d’Enric centre, in Tarragona, and Dolors Bassa to Puig de les Basses, in northern Catalonia.