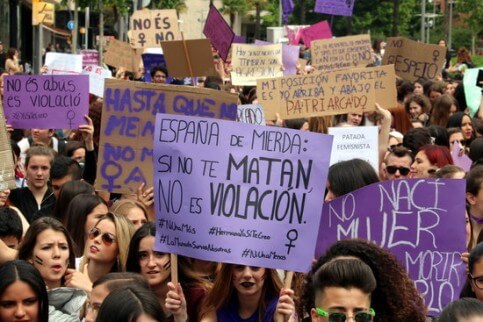 One of the highest profile sexual assault cases in recent times was back in the news on Friday as Spain’s Supreme Court considered an appeal from the prosecution to overturn the verdict in the infamous case.

In April last year, a court in Pamplona, in the Navarra region, convicted a group of five men popularly-known as ‘La Manada’ of sexual abuse rather than rape, after they sexually assaulted a young woman during the San Fermín celebrations in 2016.

The men were accused of raping the woman, then aged 18, at the entrance to an apartment building in Pamplona on 7 July  2016, at the start of the popular week-long bull-running festival.

The case led to major protests all over Spain rejecting the verdict in which the judges argued the men did not use violence during the assault, and that the woman did not fight back while the attack took place.

In the hearing preceding the ruling, the prosecutor argued that the men should be convicted of rape because they used ‘force and intimidation’ during the attack, and that the victim, who was ‘paralysed with fear’,should not be expected to show ‘dangerously heroic attitudes’.

Before the hearing took place, the men’s defence lawyer said he hoped that the ‘media pressure’ would not influence the decision of the judges and he stressed that his clients had no other option but ‘to trust in the judiciary’.

Condemnation has also come from political institutions. The shockwaves from the initial verdict and the protests it provoked were even felt on a European level, with the EU commissioner for Justice, Vera Jourová, saying she expected the Spanish judiciary to make a ‘quick and fair’ decision on the prosecutor’s appeal.

The case is known as ‘La Manada’ because of the name of the WhatsApp group the men used to share the video of the attack. While the prosecutor pressed for a 22-year prison sentence, the men were finally sentenced to nine years, leading to the appeal.