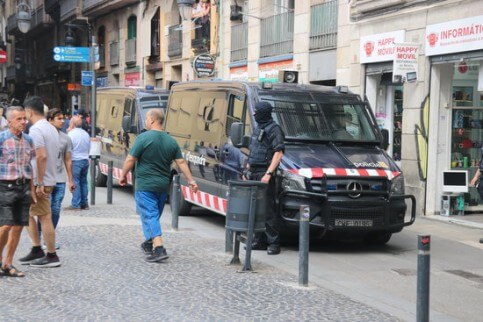 Over 500 officers from the Catalan police (the Mossos d’Esquadra), the local city police, as well as Spain’s National Police took part on Thursday in a major operation against a drug trafficking network in Barcelona’s central Raval neighbourhood.

Sources for the security forces said the criminal organisation targeted in the operation is mostly made up of street sellers of Pakistani origin illegally peddling drinks in the Catalan capital’s Front Marítim and Ciutat Vella areas.

As part of the operation, officers from the three police forces were expected to carry out raids on at least 35 dwellings, warehouses, and flats used as selling points for illegal drugs, known popularly as ‘narcopisos’ (or ‘narcoflats’).

By 9pm, police had arrested around 50 people and questioned 105 in total.

According to police sources, the street sellers offering tourists canned drinks also sell all types of illegal drugs, including those to improve sexual performance, such as Viagra. The sellers either carry the drugs on them or direct customers to a flat in the Raval.

The network of street sellers is also believed to be involved in distributing heroin to a regular clientele of drug addicts, say the same sources.

It is the second major police operation against organised drug trafficking to take place in the Raval district in recent months. The first was in October last year, which included over 40 raids and led to some 55 arrests.