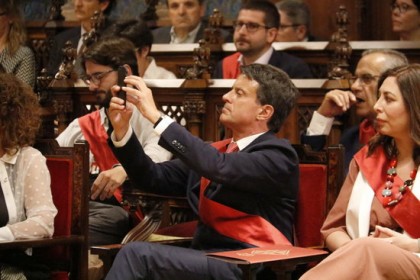 The Ciudadanos (Cs) party has cut ties with Manuel Valls, the former French prime minister who ran in the Barcelona local election supported by the unionist party, after he helped Ada Colau get re-elected as mayor.

In a surprising political u-turn, Valls offered Colau his votes in the city council to prevent what he saw as a greater evil: the capital of Catalonia having a pro-independence mayor, Ernest Maragall, who in fact won the election.

The former French politician and the newly elected mayor are seen to have opposite points of views on economic and social issues. Yet, Colau accepted bidding to stay in power, knowing her bid would be successful with Valls’ votes.

But the Cs party disagreed with him; half of the six councillors of the Valls group are, indeed, members of Cs, and they voted against Colau in the opening plenary session.

This meant a disparity in votes in the very first decision the group had to take, and has now led to the breakup between Valls and Ciudadanos.

For the former, Colau is the lesser evil as she is not in favour of independence, but the latter see her as favourable to a Catalan republic and therefore not better than Maragall.

Yet the mayor’s party, Barcelona En Comú, tends to avoid this debate and vies for breaking the pro-independence and unionist blocs and bring the left-wing groups together.

Ciudadanos’ speaker Inés Arrimadas said Colau was ‘putting the local council at the service of separatism’ like Maragall would have done, on the grounds that the newly elected official backed hanging a yellow ribbon on the town hall’s balcony in solidarity with the jailed and exiled pro-independence leaders again.

Indeed, on Monday afternoon, the council decided to again hang the sign in an all-party meeting, with Colau’s group being crucial for the proposal to succeed.

All Spanish MEPs able to take oath in Madrid … except three