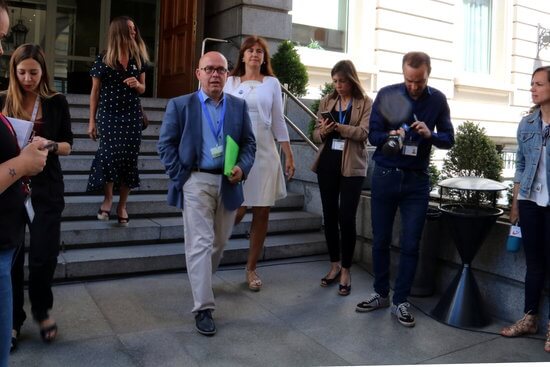 The 54 MEPs-elect in Spain were summoned to take the constitutional oath on Monday in the Spanish Congress in Madrid, a step made compulsory by the Spanish electoral authority (JEC) in order to take up their seats in the European Parliament on 2 July in Strasbourg.

Yet while 51 of them fulfilled this step, three of them did not attend, although they would have liked to, and therefore, in principle, won’t be able to become Members of the European Parliament.

They are the Catalan pro-independence exiled leaders Carles Puigdemont and Toni Comín, and the jailed politician Oriol Junqueras who, unlike the other 8 new Catalan MEPs, could not take up their seats.

All three were officially declared MEPs-elect last week, and made efforts to be in Spain’s Congress on Monday but the courts denied them. They will continue making moves to take up the seats they won in the election, but from now on looking towards Europe’s courts rather than Spain’s.

Carles Puigdemont and Toni Comín, former Catalan cabinet members, are free citizens outside of Spain, where they face an arrest warrant.

This means if they had tried to travel to Madrid to take the oath, they would have been arrested, and likely imprisoned and tried.

Both requested to Spain’s Supreme Court to lift the arrest warrant to give them the chance to attend the Madrid event and become MEPs – but this was rejected by the judges at the weekend.

Puigdemont and Comín’s lawyer, Gonzalo Boye, said soon afterwards that both the electoral authority and the Supreme Court have so far reacted as expected.

He also confirmed that they will take the case to the Court of Justice of the European Union (CJEU), based in Luxembourg, which he expects to be ‘fast’ to take a decision.

‘Luxembourg has fairly clear criteria on what comes first between the national law and the European one, especially if the national one opposes the European and not only the interests of three MEPs, but those of the 2 million people who voted for them,’ he stated.

On Monday, Boye tried to take the constitutional oath on behalf of his clients with the power of attorney so that both officials can take up their seats – but Congress prevented it.

He then said that he would present the power of attorney before Spain’s electoral authority.

Meanwhile, Oriol Junqueras requested a permit to leave jail from the Supreme Court, so that he could take up his seat on Monday in Madrid.

The same permit was granted by the same court one month ago, when he swore in as an MP in Congress, but this time the judges refused it.

They argued that this would pose an ‘irreversible danger’ for the proceedings against him, with a verdict still pending.

The judges also pointed out that this would mean ‘losing jurisdictional control’ over the defendant.

On Sunday, Junqueras’ lawyers urged the Supreme Court to ask the CJEU to rule on the issue.

The following day, one of his group colleagues also elected as MEP, Diana Riba, swore in ‘for the right to self-determination, for the release of the political prisoners and the return of the exiled’.

Meanwhile, the European Parliament avoided commenting on Spain’s judicial veto of Junqueras on Friday, amid complaints of senior MEPs such as Ska Keller.

Some days earlier, Puigdemont and Comín intended to get started with the procedure to become MEPs in the chamber building in Brussels, but were denied access to the chamber with no clear reason.

Both officials filed an official complaint against the institution, and five of the parliament’s vice presidents distanced themselves from the decision.

At request of Spain’s main parties, the chamber heads decided not to grant entry to any Spanish MEP-elect until they had taken the constitutional oath in Madrid.