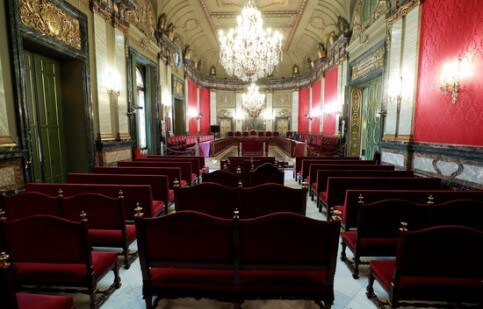 The Catalan Trial lasted 52 sessions spanning four months, in which cross-examinations were heard from the 12 Catalan prosecuted leaders, 422 witnesses and various experts. Hundreds of videos of the 2017 independence bid were also viewed, as well as closing arguments from the prosecution, the defence lawyers, and all the 12 defendants themselves.

So when will the verdict be out?

After so many sessions, it would be a little unrealistic to expect the seven Spanish Supreme Court judges to have it ready before the summer break. There is no judicial activity in August, so the verdict is expected in September or October.

What are the requested sentences again?

The public prosecutor requests up to 25 years for each of the defendants charged with rebellion and misuse of public funds, with the solicitor general asking for up to 12 years for the charge of sedition. Here are all the details of those accused, the charges, and the accusers.

Rebellion, sedition … have these allegations been proved in court?

That’s the key to the whole trial: was there any violence? The prosecution and the defence have diametrically opposing views, with the former claiming it was a coup d’état, and the latter arguing for peaceful protests.

The prosecution has basically used the statements from Spanish police officers to support their arguments, while the defence has the testimony of some of the protestors ahead of the referendum and voters on 1 October 207. The defence lawyers are calling for their clients to acquitted.

Can the verdict be challenged?

The sentence will be final, but the defence lawyers can still take the case to Spain’s Constitutional Court, and then if necessary to the European courts. If the defendants are found guilty, the alternative to sentencing could be for the Spanish government to possibly grant them pardons.

What will be the impact of the sentence?

In Catalonia, a harsh sentence will be seen as a dissuasive punishment for the leaders, and the whole independence camp. Yet the prosecuted officials also suggested that the verdict could be an opportunity for resolving the conflict by returning the issue to the sphere of politics. ‘Generations to come will depend on this verdict, which has the potential to provide a solution,’ said former minister Dolors Bassa in her closing remarks.

The Catalan president, Quim Torra, has already said he will ‘not accept’ a guilty verdict, but he has not made clear what this will mean exactly. He said he will try to reach consensus with the Catalan Parliament in order to provide a united response. He is already meeting with some parties to reach a united position within the independence camp to provide a ‘collective response’.

The response might include a snap election in Catalonia … or some reports suggest that he could even call a second referendum.

Could this really happen?

Catalan president Quim Torra and the mainstream pro-independence parties continue to call on the Spanish government to negotiate an agreed referendum, but this is very unlikely to happen. Activist Jordi Cuixart said in his closing remarks yesterday: ‘We’ll do it again.’ And the Catalan president repeated that message shortly afterwards.

What else might happen between now and the verdict?

The defence have again requested the release of their clients. Jordi Cuixart’s lawyers already did that right after the UN Working Group on Arbitrary Detention called for their release two weeks ago.

What if they are unsuccessful?

In that case, they are expected to ask to be transferred to Catalan prisons, as they won’t need to attend the Supreme Court in Madrid again until the day of the verdict.

And will Oriol Junqueras be allowed to take up his seat as an MEP?

Oriol Junqueras was elected an MEP and has requested permission to go through all the steps to become an MEP and attend the inauguration of the EU parliament in Strasbourg, on 2 July. The prosecutor is against it, the solicitor general is in favour, but it is the judges who will decide on it soon.