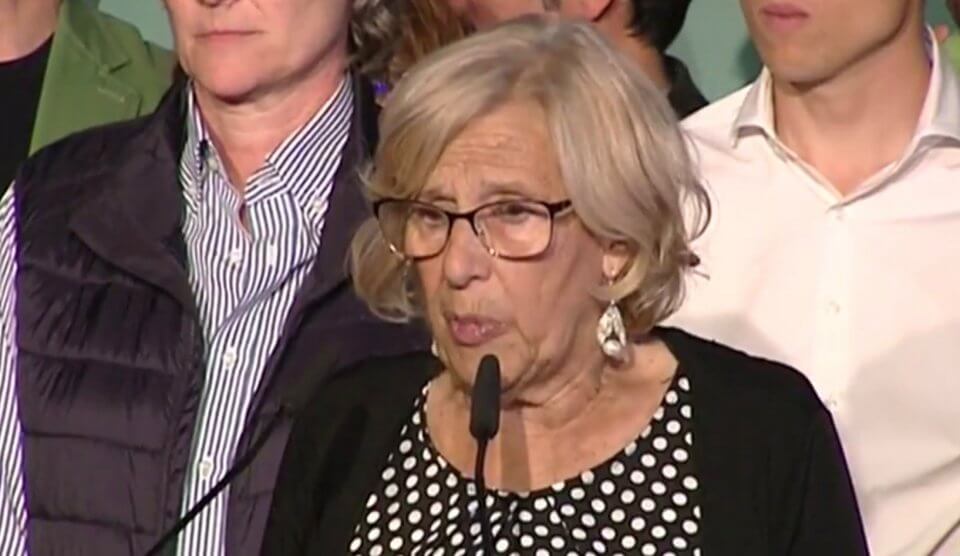 Spain’s ruling PSOE socialist party, led by acting Prime Minister Pedro Sánchez, secured an overall victory during the municipal and regional elections across Spain on Sunday 26 May (following on from the 28 April General Election) – and they also performed very well in the EU elections. However, they failed to win control of the prized Madrid City Council.

Final results on Sunday night showed that the right-wing People’s Party (PP), together with the Ciudadanos (Cs) and the far-right Vox party, could take control of Madrid. Former judge Manuela Carmena representing the left-wing party Más Madrid party, will remain as mayor until the new city council is established.

Manuela Carmena conceded defeat late last night. ‘We have won, but we’re not going to be able to govern,’ she said. ‘It is not the result that we were hoping for. But this city will continue to be progressive, and focused on solidarity.’

Divisions among the left-wing parties, particularly within Podemos, appear to be the key factors behind the results in Madrid.

Carmena had campaigned jointly with Íñigo Errejón, one of the co-founders of Podemos alongside Pablo Iglesias. Whilst Errejón’s Más Madrid party obtained a good result – 20 seats in the regional assembly compared to the seven secured by Podemos – it leaves the left without Madrid, and Errejón as the leader of the second party of the opposition in the region.

The left-wing Podemos party suffered a greater defeat than expected, with leader Pablo Iglesias so far not making an appearance to explain the results and address his party’s supporters. The situation might now also put in jeopardy his hopes to form a national coalition government with acting PM Sánchez.

Whilst the PSOE were clear winners across Spain on Sunday, and in the EU elections, the PP bounced back from their dreadful performance in the 28 April elections, and being able to govern in Madrid will help the party establish itself as the main opposition overall.

PP leader Pablo Casado appeared ecstatic after the results were confirmed in Madrid. ‘There is only one PP, and the Spanish people have decided to vote for the original,’ he said. ‘We are the big party in Spain. The PP will be here for decades.’

Right-wing parties also took a majority in another key city, Zaragoza, while the left maintained Valencia. The PSOE has also hung on to power in the regions of Castilla-La Mancha, Extremadura, and the Balearic Islands, but it is still uncertain whether they can maintain Aragón.

Following the defeat of Manuela Carmena in Madrid, Ada Colau, the former campaigner who became Mayor of Barcelona 4 years ago, also lost out by a slim margin to the  Esquerra Republicana (ERC) party.

Unless the parties come to an alternative arrangement, the ERC candidate Ernest Maragall will become the new Mayor of Barcelona in a technical draw that came down to a difference of just 4,000 votes. Maragall’s pro-independence ERC party and Colau’s left-wing Barcelona en Comú won 10 seats each, but with the former doubling their previous number of seats and winning by a nose.

After leading the pack, the Catalan Socialists (PSC) ended up with eight seats, four more than before, with the pro-independence Junts per Catalunya (JxCat) ending up with five seats (five fewer).

Colau has acknowledged Maragall’s win and offered the chance to form a ‘cross-party, left-wing government’ after what she described as a ‘historic’ victory for the left in Barcelona.

Maragall himself stretched out a hand to Colau, as well as the pro-independence JxCat candidate, the jailed Joaquim Forn, currently one of the 12 defendants in the on-going Catalan Trial at Spain’s Supreme Court.

The likely next mayor of Barcelona stressed that the city council will be committed to ‘dignity, justice and freedom’ and he underlined that it would ‘not be up for negotiation’.

The biggest news in the European Parliament elections came with both Carles Puigdemont and Oriol Junqueras being elected as MEPs.

Puigdemont said that winning a seat in Europe shows ‘the strength of his project’ from ‘exile’ and added that the victory was the ‘winning strategy’ and a testament to the ‘persistence’ for the Catalan independence movement.

ALSO READ: Junqueras: ‘They’ve suspended us in Spain, but won’t be able to in Europe’

Puigdemont’s Lliures per Europa ticket got the most votes in Catalonia, some 950,000, winning two seats in the European Parliament, which will be taken up by Puigdemont and his former minister, Toni Comín.

Another former minister and councillor-elect in Barcelona, Elsa Artadi, commented on the ‘exiled’ Puigdemont and ‘jailed’ Oriol Junqueras winning seats in the European Parliament, warning Spain that it can ‘no longer hide the disgrace of its repression.’