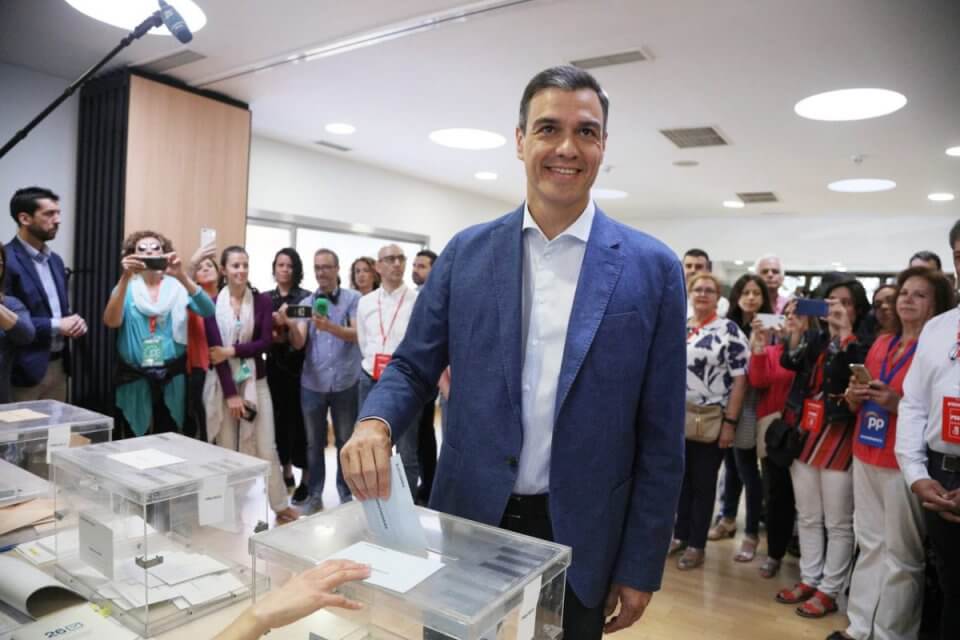 It’s Election Day across Spain (again) – and following on from the 28 April General Election the attention now turns to European, local and regional politics.

Acting Prime Minister Pedro Sánchez is seeking to have his PSOE party’s April victory endorsed at a local level in Sunday’s polls, as well as hoping to gain influence in the EU, before forming his new Spanish government.

Spain could actually be the only major EU member state where socialist parties come out top in the EU parliament.

In Spain, the results of both the local and regional elections may determine what Sánchez’s new government looks like, and he has urged his supporters to ‘finish the work’ of the general election and turn out in force.

While Sánchez wants to rule alone in a minority government, Pablo Iglesias, the leader of left wing Podemos, is pushing him to form a coalition government. Whether Sánchez accepts or not may depend on how both parties fare.

Polls suggest the Socialists will come out on top in most of the 12 regions going to the polls on Sunday. But the focus will also be on Madrid which could swing left after being governed by the right-wing People’s Party (PP) for 24 years.

For Spain’s local elections, the proportional, party-based system is broadly the same as in the country’s general election – but each town and city council is a separate constituency, meaning results vary from place to place.

The mayor and deputy mayors are elected by their respective council assemblies so, like a prime minister, they need to command a majorityin their local legislature. Should all the candidates fail to do so, the post of mayor goes to the largest party.

For the European Parliament elections, the whole of Spain counts as a single constituency and parties are allocated MEPs broadly in proportion to their share of the Spanish-wide vote.

Spain will initially have 54 representatives in the EU Parliament, but when (and if) Brexit finally happens and the UK leaves the EU bloc, a further five Spanish MEPs will take their up seats.

ALSO READ: Focus: the EU elections and ‘the Catalan question’

In the EU elections, ousted Catalan president Carles Puigdemont, together with his former ministers Toni Comín and Clara Ponsatí, are standing as candidates in exile from Belgium for liberal pro-independence alliance Junts per Catalunya (JxCat) – after initially being barred by the electoral authority.

Puigdemont, the lead candidate, is expected to win a seat in the EU Parliament but it remains to be seen whether he would actually be able to take it given the controversy over his legal status following the failed independence drive in October 2017.

Oriol Junqueras, Puigdemont’s vice-president in 2017 and leader of left-wing, pro-independence Esquerra Republicana (ERC) party, is standing as the top candidate for the ‘Ara Repúbliques‘ alliance despite remaining in custody whilst a defendant in the on-going Catalan Trial.

If Junqueras wins a seat as projected by the polls, he will have to choose whether to remain a member of the Spanish parliament or attempt to assume his post in Europe. Yet whether he can last the full term looks uncertain pending his trial outcome.

In Barcelona, the current mayor Ada Colau is battling to keep control of the City Hall in a likely close race with her ERC rival Ernest Maragall. The leader of left-wing unionist alliance Barcelona en Comú, Colau became the first woman in charge of the Catalan capital in 2015 but could have to cede overall control in a coalition with Maragall as mayor.

Ex-French prime minister Manuel Valls, supported by staunch unionist party Ciudadanos (Cs), is widely expected to fall short in his ambition of becoming mayor of Barcelona – but if neither the pro-independence nor constitutionalist blocs win a majority, he could play a part.

When will we know the results?

For the European elections, an estimate for Spain will be published after polls close in the country at 8pm local time. Official provisional results for Spain, as well as a Europe-wide results projection, will not arrive until polls close in Italy at 11pm.

For the local elections, the timings will differ between councils but most results are predicted to become clear around midnight at the earliest.

‘Westworld’ filming in Besalú, near Girona