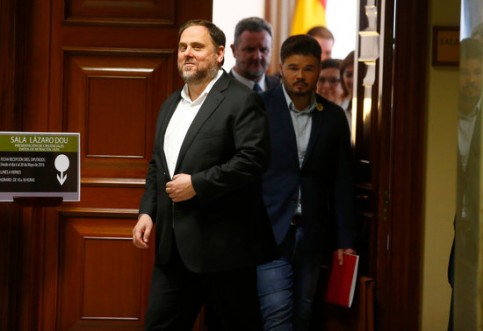 Pablo Casado, the leader of the People’s Party (PP), has announced that his party ‘will demand that the necessary measures be taken to ensure that the five defendants are suspended as parliamentarians’ – referring to the five pro-independence politicians who temporarily left prison to collect their parliamentary passes in Madrid on Monday.

Speaking at a meeting of the new MPs of the PP party for the Congress and Senate, Casado described as ‘derision’ that the politicians will also participate on Tuesday in the constituent session of the Spanish Congress, and a ‘provocation’ and ‘offensive’ that they have been able to sign for their credentials on Monday.

Albert Rivera, leader of the Ciudadanos (Cs) party, tweeted a similar message: ‘We will present a document before the Congress Committee … to demand the automatic suspension of the MPs in prison. Those who struck a blow against our democracy cannot have a seat and collect a salary from all Spaniards.’

Meanwhile, former Catalan president Carles Puigdemont has praised the pro-independence politicians who temporarily for ‘going into the Spanish parliament, elected to defend the same ideals that brought them behind bars’.

Exiled leader Puigdemont, four of whose ministers, including his vice-president Oriol Junqueras, are among the newly-elected MPs and senators who will take their seats on Tuesday, reiterated his belief that the spectacle of politicians entering the chambers from the back of a police van, under vigilance for the length of the process, was proof that they are ‘political prisoners’.

‘An embarrassment to some and an immense credit to you, friends,’ he wrote on Twitter.

Laura Borràs, an MP for the Junts per Catalunya (JxCat) party who greeted her colleagues in Congress, described the three imprisoned members as ‘determined’ and vowed ‘they will not give up on anything’.

The Catalan Parliament speaker Roger Torrent expressed his ’emotion’ at seeing a ‘giant’ like Raül Romeva entering the Senate and his ‘shame’ for the manner in which it took place.

Meanwhile, former French prime minister Manuel Valls, running for Mayor of Barcelona in the elections that take place on Sunday 26 May with the support of staunch unionist party Ciudadanos (Cs), emphasised that the restricted registration process for the five rebellion suspects was ‘completely in line with the law’.

Valls added that in allowing the jailed Catalan leaders to take part in the opening events of the new parliament, Spain’s courts had ‘set an example’ and demonstrated their impartiality.

Batet and Cruz confirmed as Congress and Senate speakers