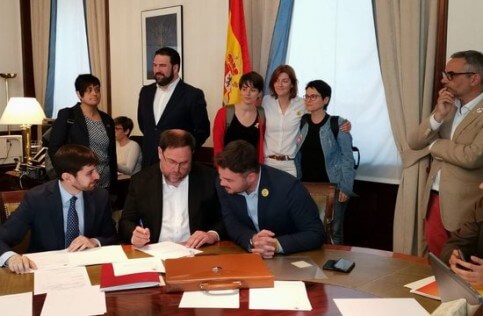 The five jailed Catalan pro-independence leaders who were elected as MPs and senator in the 28 April Spanish General Election – and who are currently on trial in the Supreme Court – arrived at parliament to register as representatives on Monday morning.

The Spanish police escorted them from the Soto del Real prison, in the Madrid region, to the Spanish Congress and Senate.

The leader of the Esquerra Republicana (ERC) party, Oriol Junqueras, was among the jailed leaders arriving at congress, as well as Junts per Catalunya (JxCat)’s Jordi Turull, Josep Rull and Jordi Sànchez

Meanwhile, Junqueras’ party colleague, Raül Romeva, arrived at the senate as the official who got the most votes in the Barcelona constituency.

The five, who have been in custody for more than a year, were all expected to be driven straight back to their cells, with no permission to hold meetings or talk to the press.

‘I am fine now, because I am surrounded by friends and colleagues, it is an extraordinary privilege,’ he said. He also sent a message to the newly elected ERC MPs and senators: ‘When I see you on TV that there are 15, or 28, of you, I feel infinite pride, and what is needed is to win this Sunday and lead the country to freedom.’

Jordi Sànchez, a pro-independence activist who successfully stood for Carles Puigdemont‘s JxCat party from prison, spoke of his pride in a video from parliament posted online.

‘I am here with the aim of continuing to serve all the people who went out to vote on October 1, who expressed, in a dignified, peaceful and democratic manner, their desire to be free,’ Sànchez said, in reference to the referendum on independence carried out unilaterally in 2017.

The Supreme Court, which has been trying the men for their role in an October 2017 secession attempt in Catalonia, ruled last week that they could also attend the opening session of parliament and take the oath of office on Tuesday.