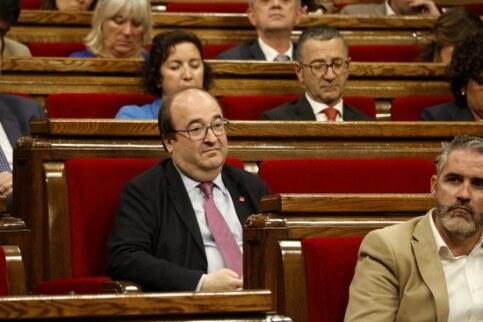 The leader of the Catalan Socialists (PSC), Miquel Iceta, will not become the speaker of the Spanish Senate after the pro-independence parties in the Catalan Parliament voted against appointing him to a seat in Spain’s upper house.

Acting Spanish Prime Minister, Pedro Sánchez, had nominated Iceta to head the Senate, but in order to take up the post the PSC leader needed the Parliament to grant him the seat vacated for this purpose last week by former Catalan president, José Montilla.

What would normally have been a formality turned into something of a saga as the Catalan pro-independence parties – which together have a majority in the Parliament – dragged their feet over appointing Iceta due to his opposition to Catalan self-determination.

Shortly after the vote, Iceta announced that he had asked for protection from Spain’s Constitutional Court. ‘Sectarianism has prevailed over legality and common sense,’ he said.

The Spanish government, also Socialist, pre-empted the result of the vote by warning the pro-independence parties that blocking Iceta ‘would have legal consequences,’ in reference to a challenge in the Constitutional Court, according to deputy prime minister, Carmen Calvo.

While it is in the power of the Catalan Parliament to grant the Senate seat, the Spanish executive will argue that it is the PSC’s ‘right’ to replace one of its senators with another, and that blocking the appointment breaks ‘the obligatory proportionality’ of the chamber.