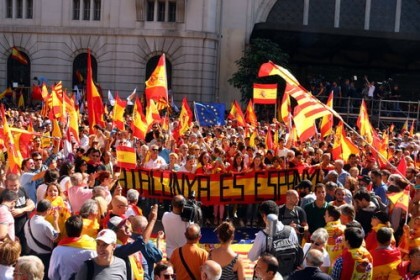 The number of people in Catalonia who would vote ‘No’ to independence appears to have surpassed the ‘Yes’ vote for first time since the failed independence drive, according to a new poll.

The research by the Centre for Opinion Studies (CEO) indicated that 48.6% of those surveyed would vote against Catalonia splitting from Spain, compared to 47.2% in favor.

Public support for independence had been higher since the months leading up to the October 2017 referendum, and this is the first time the trend has reversed since June 2017.

The poll also suggested that 60% of Catalans would prefer a left-wing coalition government in Madrid made up of the Spanish Socialists (PSOE) and the Podemos party.

While PSOE was the big winner in the Spanish general election on 28 April, with 123 seats, its gains fell short of the 176-seat majority it needed to form a government alone.

That makes a coalition agreement almost inevitable, and in the latest CEO poll, only 17% of those surveyed said they would prefer PSOE to govern alone without a majority.

The poll also shows that only 13% of people favor a coalition between PSOE and the Ciudadanos party (Cs), which implacably opposes the independence movement.