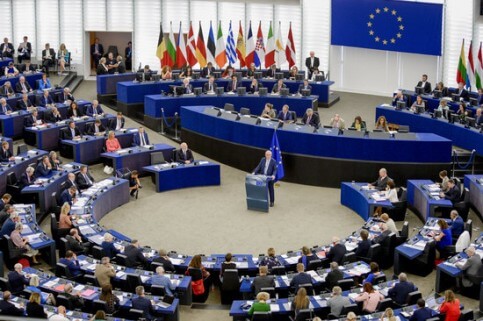 ‘It’s an internal affair.’ This has been one of the official answers over the past 18 months in Brussels when the EU institutions have been questioned about Catalonia.

However, an EU-Catalonia Dialogue group has also been set up by several MEPs and even a plenary debate was held as a result of police violence on the Catalan independence referendum day.

With the European Parliament elections on 26 May, and in due course a new political term in Spain that is bound to be marked by the outcome of the Catalan trial, for the Catalan political parties the European Parliament will now become another battlefield for the independence process, where some demand that Europe ‘intervenes’, and others raise it as the guarantor of Spanish unity and the Spanish Constitution.

Exiled former Catalan president and topping the list of candidates for the European Parliament for the Junts per Catalunya (JxCat) party, and under the ticket of ‘Together for Europe’, Carles Puigdemont is ‘convinced that institutions can not keep silent’ on Catalonia.

Oriol Junqueras, the former Catalan vice-president and one of the pro-independence figureheads currently on trial, is the top candidate for Esquerra Republicana (ERC) under the coalition ‘Now Republics’, with Diana Riba, the wife of another of the leaders currently on trial and in custody, as his second-in-command. Junqueras sees the elections as ‘an opportunity to defeat repression with all Europe looking’ and implores the EU to be a ‘part of the solution’.

After failed attempts by Spain’s electoral authority to bar Carles Puigdemont from running for the European Parliament, it remains to be seen whether either Junqueras or Puigdemont would be able to take office.

All in all, it looks like at least nine Catalans politicians could win seats in the European Parliament.

The candidate for Catalunya en Comú, (‘Catalonia In Common’ – and part of the Green alliance), Ernest Urtasun, believes that Brussels can push for ‘dialogue’ on the Catalan crisis, but adds that the current situation must be resolved within Spain.

In his opinion, the European Commission could have played a ‘more active’ role in fostering dialogue rather than merely saying that it is ‘an internal affair and does not want to know anything’.

‘We would like a more proactive committee, but we must explain that the European chamber will not come to solve the problem,’ warns Urtasun.

In a similar line, the number 5 of the candidature of the PSOE, Javi López, believes that the solution will not come ‘from the hand’ of the continental institutions: ‘Whoever projects a solution from the EU is deceiving Catalans.’

López believes that the resolution must come ‘first among the Catalans’. For Lopez, the EU is ‘a guarantee of having a space based on the rule of law, fundamental rights and democracy’ and claims that the European project wants to ‘blur borders’ and ‘avoid conflicts that have roots in the clash of national identities.’

The Ciudadanos (Cs) party rejects the idea that Brussels has a role in the Catalan question. This is expressed by the number 6 of the party’s list of candidates, Jordi Cañas, who intends to recover the image of Spain that, according to him, ‘has tried to discredit nationalist parties.’

‘It is important that Members of the European Parliament defend Spanish interests,’ Cañas has said.

Dolors Montserrat of the People’s Party (PP), has already asked for the vote for the PP to ‘strengthen the European order and extend it to new crimes such as rebellion and sedition, because a fugitive of justice cannot be in Europe, but before the Spanish of justice,’ with reference to Carles Puigdemont.