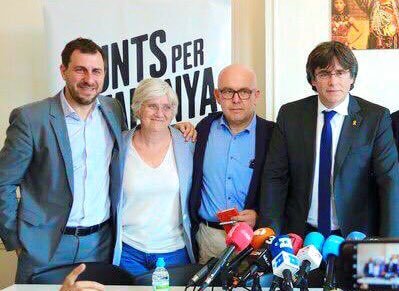 Former Catalan president Carles Puigdemont will be able to run in the European Parliament elections after a local court in Madrid ruled in his favour, thereby overturning an initial ban from Spain’s electoral authority (JEC).

The decision also affects Toni Comín and Clara Ponsatí, who were ministers under Puigdemont in 2017 when the Catalan government called for a referendum and declared independence despite Spain’s opposition.

The three pro-independence politicians saw themselves banned from the race last week after an electoral authority majority accepted an appeal to their candidacies brought forth by unionist parties Ciudadanos (Cs) and People’s Party (PP).

Puigdemont’s MEP electoral bid was initially dismissed as a ‘mockery’, as he is wanted by the Spanish judiciary over rebellion charges. However, the decision was subsequently challenged by Madrid’s attorney general and the Supreme Court, and ultimately overturned by a Madrid court.

According to the ruling, excluding Puigdemont and his former ministers as candidates would infringe on their ‘basic right’ to stand in an election.

The decision can still be challenged in the Constitutional Court, the highest judicial body in Spain.

Whilst the Junts per Catalunya (JxCat) party will finally be allowed to have the names of Puigdemont, Comín and Ponsatí on their ballots on 26 May, it is unclear whether they would be able to assume their posts as MEPs if they were to win.

A recent report by the European Parliament legal services warned that, if elected, the exiled politicians would be required to return to Spain to take the oath of office and therefore risk detention for their role in the 2017 independence bid.

Minister walks off in protest during Holocaust memorial