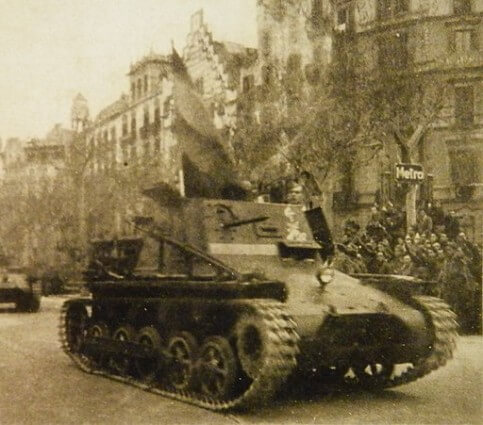 Spain has marked the 80th anniversary of the end of the 1936-39 civil war, after which began the dictatorship of Franco, with the country still divided over the issue.

The Association for the Recovery of Historical Memory (ARMH), a group that represents the leftist Republican victims of Franco’s victorious Nationalist forces, stated it regretted that the state did not ‘organise any memorial ceremony on such a day’.

Despite no official ceremony to mark the anniversary, Prime Minister Pedro Sánchez visited France in February to pay tribute to the 450,000 Spaniards who sought refuge there during the war and the dictatorship that followed which lasted until Franco’s death in 1975.

Reactions marking the day diverged on right and left.

Franco’s great-grandson, Luis Alfonso de Borbon, celebrated the 80th anniversary of the ‘victory’ of the dictator’s Nationalists forces on Twitter.

‘Today April 1 is the 80th anniversary of the victory of the Nationalist camp over the red army, which put an end to three years of civil war,’ he wrote.

Meanwhile, one of the leaders of the Podemos party, Ione Belarra, wrote on Twitter: ‘Today April 1 marks the 80th anniversary of the end of the Civil War. The dictatorship began. In Spain everything still needs to be done in terms of recognising those who fought for democracy.’

Renowned historian historian Paul Preston calculated that 20,000 Republican supporters were executed after the war in his 2012 book The Spanish Holocaust.

Preston estimates that 200,000 people died in combat during the conflict, and another 200,000 were murdered or executed – 150,000 of these at the hands of nationalists.

Franco’s regime paid tribute to its dead after the conflict, but those who died on the opposite side were largely forgotten and dumped in mass graves.

Campaigners say more than 100,000 of Franco’s victims from the civil war and its aftermath remain buried in unmarked graves across Spain – a figure, according to Amnesty International, only exceeded by Cambodia.

The anniversary comes ahead of a snap general election on 28 April in which Franco’s legacy remains in focus.

Far-right party Vox has nominated as candidates to run in the parliamentary election two retired generals who in July signed a manifesto which denounced that Franco was being “‘vilified today to inconceivable extremes’.

Since coming to power in June, Sánchez’s minority government has made it a priority to exhume Franco’s remains from an opulent mausoleum near Madrid and move them to a more discreet spot.

It has ordered the exhumation to be carried out on 10 June. The Supreme Court is considering appeals filed by Franco’s relatives.