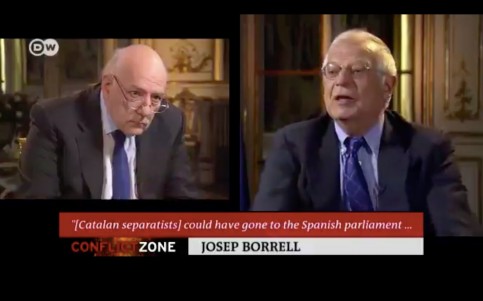 Spain’s Foreign Minister Josep Borrell refused to answer questions on Catalan independence and Spanish constitutional reform in a heated interview on German TV, and temporarily walked off the set.

‘Why not have a debate about the constitution?’ asked journalist Tim Sebastian, during a televised interview on ‘The Conflict Zone’ for German public TV Deutsche Welle.

Referring to the fact that the Catalan declaration of independence is argued as illegal due to it being not allowed within the constitution, the journalist continued: ‘That [a debate] could have touched on those provisions that outlaw independence for Spanish regions.’

‘They could have done it,’ answered Borrell, ‘they could have gone to the Spanish parliament, and presented a proposal to reform the constitution … like the Basques did.’ He concluded: ‘They haven’t done it.’

The journalist immediately asked Borrell: ‘Why didn’t you do it … are you not interested in reforming the constitution?’

The Spanish Foreign Minister retorted: ‘Who is asking for it?’ Sebastian then responded by beginning to cite that ‘70% of Spaniards want constitutional reform,’ but halfway through his sentence, the minister cut him off.

‘No, no, no, no,’ interjected Borrell, holding up his hands as the journalist looked up from his notes. Sebastian finished his sentence, clarifying that the 70% statistic was ‘according to the Center for Sociological Research’.

‘Stop it,’ said Borrell, throwing up his hands. ‘You are continuously lying.’

Sebastian repeated the statistics, specifying while interrupted, that the reform in question is ‘of some kind.’

At this, the Spanish foreign minister told the studio to stop recording: ‘I don’t want to do that anymore,’ he said, removing his microphone. It has been reported that Borrell then walked off from the interview, and although he returned to the set after consulting with his aides, the exchange between the two remained tense.

Sebastian finished the segment asking about anti-bribery enforcement and what measures Spain’s executive took. When the journalist said ‘you could do more,’ Borrell immediately fired back ‘Sure …. you too. You could do your interviews better.’

The reporter concluded by thanking the minister for being on the show. ‘Thank you to you,’ said Borrell. Then he leant forward and said: ‘but next time, I would appreciate if you could ask questions in a less biased way.’

Coronavirus in Spain full update (9 May)

Criteria for restrictions to be equal for all cities with over 100,000 inhabitants in Spain