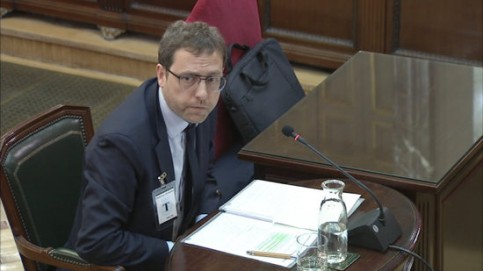 Day 16 of the independence trial started at 10am with the testimony of Jaume Mestre, the man in charge of the Catalan government’s public information department under the Carles Puigdemont executive.

Mestre added that he did not know whether it was for free or not, however.

According to Mestre, he did not ask the CCMA to design the ad campaign for the 1 October independence referendum, which featured diverging train tracks, contradicting the version given by the head of the corporation. He denied knowing how the CCMA ended up in charge of the project.

The official said he never had a meeting with the head of the corporation, Núria Llorach, about the referendum ad campaign. Yet, the prosecutor pointed out that Llorach had said the opposite in an earlier hearing.

After answering ‘I don’t remember’ to several questions, the judge warned Mestre that giving false testimony in court could lead to criminal charges.

At the end of the official’s declaration, the prosecutor asked that Mestre be investigated for giving false testimony, which the judge said he would make a decision on once the trial is over.

Also on Wednesday morning, the role of Catalonia’s foreign affairs ministry during the independence bid came under scrutiny, with relevant former officials summoned as witnesses.

Albert Royo, the former head of the Public Diplomacy Council of Catalonia (DIPLOCAT), took the stand.

Amadeu Altafaj, the former representative of the Catalan government in Brussels, was also summoned to testfy.

Altafaj, however, under investigation in another referendum-related case, declined to testify and the court allowed him not to attend the courtroom.

Diplocat didn’t hire any international observers for the independence referendum, according to Albert Royo.

On the previous day’s proceedings (day 15) of the trial, prosecutors tried to prove the accusations of misuse of public funds against former Catalan government officials, in the dock for calling a vote on independence despite Spain’s opposition.

According to police reports, the Catalan administration paid217,656 euros to a team of international experts to oversee the vote on 1 October 2017.

Albert Royo denied that international experts who visited Catalonia during the independence crisis were hired to act as observers on referendum day, but rather, their role was to write a report on the political conflict between Catalonia and Spain starting from 2010.

He didn’t deny that Diplocat paid for their travel expenses and accommodation in Barcelona.

A public-private partnership aiming to improve the image of Catalonia abroad, Diplocat has repeatedly been criticised by Spanish unionist parties as a ‘propaganda tool’ for independence plans.

When the Spanish government took over Catalan institutions under Article 155, following a declaration of independence, one of its first decisions was to dismiss Royo and order the liquidation of Diplocat.

Last July, with pro-independence parties back in power, Diplocat was reactivated.

Albert Royo told prosecutors that Diplocat was independent from the Catalan government and only sporadically did it work together with government offices abroad.

He also stressed that the organisation always aimed for plurality when organising conferences and workshops, both in Catalonia and abroad, and reached out to both pro-independence and unionists groups.

Denying any involvement in preparations for the 1 October referendum, Royo stressed: ‘We only did our job: explaining the reality of Catalonia abroad. How come what we did in 2017 is seen as a crime due to the political situation, when we were already doing it in 2015 and 2016?’

Summoned trial witnesses Paul Sinning and Helena Catt, two researchers who visited Catalonia during the referendum, notified they wouldn’t be attending the afternoon session of the trial on Wednesday. Instead, they are expected to give their testimony on 27 March.

As a result, there was no afternoon session in court today.