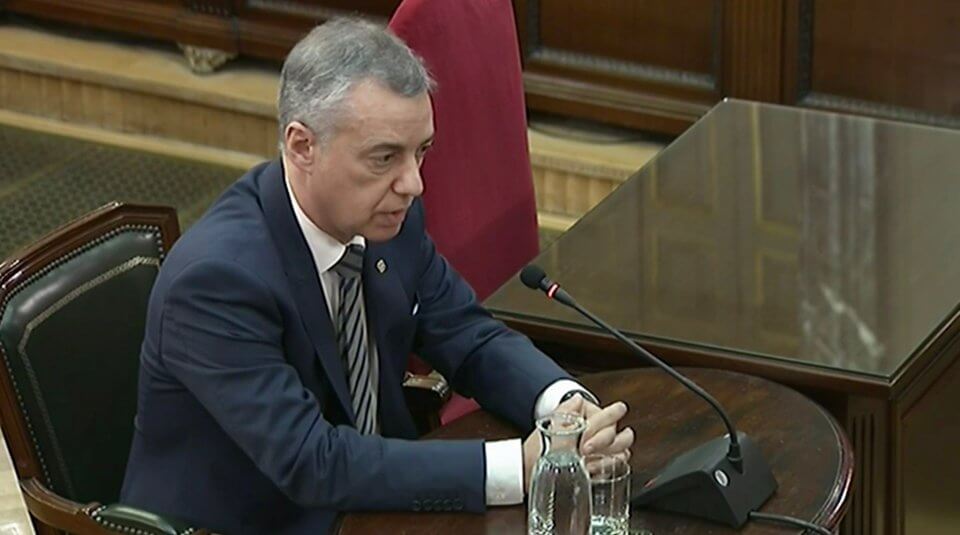 Basque leader Iñigo Urkullu revealed his mediation efforts in the Catalan crisis during his testimony on the 9th day of the trial of the 12 Catalan independence leaders at the Supreme Court in Madrid.

He said that days before a banned referendum, he warned Spain’s then prime minister Mariano Rajoy that the situation in Catalonia was ‘getting out of hand’.

He said he had been speaking to Rajoy and Puigdemont for months before the independence referendum on 1 October 2017.

He told the Supreme Court that on 21 September, he had warned Rajoy of the potentially disastrous consequences of the crisis.

‘I made the observation that everything was getting out of hand,’ he said.

‘I told him I thought the next steps should be carefully considered so as not to provoke situations that would lead to a social breakdown.’

Urkullu said the phone conversation took place a day after police raided the offices of the regional economy ministry in Barcelona ahead of the referendum.

These were stopped from leaving the building by hundreds of protesters in a long, tense incident that saw several police vehicles destroyed – events that are being closely scrutinised at the trial.

Urkullu said he started his mediation efforts in June 2017 when he met with Puigdemont in Barcelona.

The Basque leader said Puigdemont was the first to ask him to act as a ‘mediator’ in the political crisis, to reach an agreed solution [between the Catalan and Spanish governments].’

The following month, he met with Rajoy and held countless phone calls and meetings with people on both sides after that.

‘Puigdemont had a totally receptive attitude’ towards him as ‘mediator,’ said Urkullu, while he said Rajoy ‘listened with attention’ but was ‘reluctant that dialogue would lead to negotiation outside of the Constitution’.

In October, Urkullu said he sought to dissuade Puigdemont to go through with a unilateral independence declaration and to avoid Madrid imposing direct rule on the semi-autonomous region.

Puigdemont ‘didn’t at all want to proceed with a unilateral declaration of independence,’ Urkullu said.

According to Urkullu, Puigdemont agreed not to declare independence in exchange for Spain not suspending Catalonia’s self-rule, but asked for ‘guarantees’.

Yet Urkullu explained he was unable to get those ‘guarantees’ from the Spanish government.

He added he also felt Rajoy ‘was not really keen on applying’ direct rule on Catalonia and may have decided against it if Puigdemont had called snap elections to ease the crisis.

But after agreeing to do so, Puigdemont changed his mind on 26 October with the pressure of pro-independence protesters who were ‘rebelling’ and his political grouping, Urkullu said.

The Esquerra Republicana (ERC) party MP Gabriel Rufián also gave testimony as a witness on the 9th day of the trial.

During his testimony Rufián said that during the whole independence bid he only saw violence ‘from Spain’s police during October 1 referendum’.

The former left-wing MP, Albano Dante Fachin, testified after Rufián. During his cross-examination, he said that the 20 September protest ‘was quite plural, not only pro-independence’.

According to him, already in the morning there were ‘journalists standing on Spanish police cars.’

He also referred to the 1 October vote. ‘Some people were beaten for trying to vote against independence in the referendum,’ said Fachin, alluding to 300,000 people who voted ‘no’ in the vote.

A former Catalan parliament president, Ernest Benach, was also summoned to testify in the morning.

The mayor of Barcelona, Ada Colau, criticised the independence trial whilst also testifying as a witness in the proceedings, on the 9th day of the trial.

‘If we are here for a referendum, we should be here millions of people,’ she said.

According to Colau, a lot of people including her ‘were delighted to see the type of mobilisation seen on 1 October, which was not organised by any institution or political party. It was millions of self-organised people.’

She also confirmed Barcelona City Council gave permission to use premises to work as polling stations on 1 October and said she did it because they gave ‘political support’ to the vote.

Therefore she decided to give the opportunity for people to choose between ‘voting yes, voting no and not voting’.

Colau called the Spanish police actions on 1 October ‘brutal charges’ and added that she called Madrid representative in Catalonia ‘to stop the charges’.

She also commented on 20 September 2017, the day in which some public buildings were raided in an attempt to dismantle the referendum logistics.

‘The situation on 20 September was very worrying and there was the feeling of a state of emergency,’ she said.

That day ‘the Spanish police tried to enter the HQ of the CUP party without judicial order.’

For her, the demonstration responding to the raids was ‘civic and responsible’, like on 1 October.

One of the two people facing rebellion charges for that demonstration, Jordi Cuixart, was praised by Colau. ‘My heart is broken to see activist Cuixart and the others in precautionary jail,’ she said.

The former Spanish interior minister, Juan Ignacio Zoido, testified in the afternoon on the 9th day of the trial.

Zoido was in charge of Spain’s law enforcement during the violent crackdown of the vote by Spanish police on 1 October 2017, which left 1,000 injured.

However, Zoido claimed he was not in charge of the police operation to stop the Catalan independence referendum and denied giving ‘any orders’.

He rejected controlling the police operation and put on the spotlight colonel Diego Pérez de los Cobos, the coordinator of law enforcement agencies at the time of the vote.