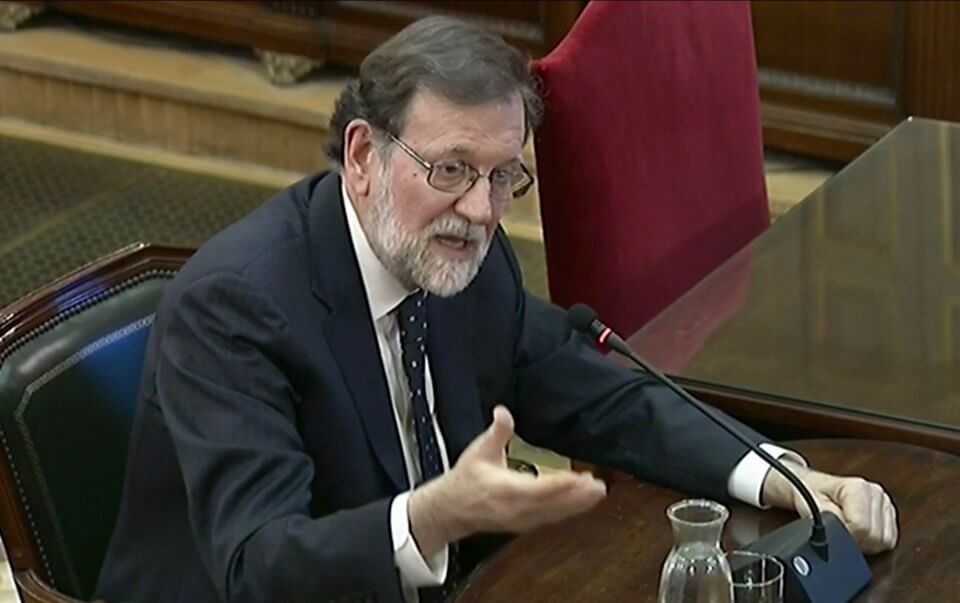 Witnesses began giving testimony today, on the 8th day of the trial of Catalan independence leaders in Spain’s Supreme Court, including Spain’s former prime minister, Mariano Rajoy, after the last of the defendants testified on Tuesday.

The Esquerra Republicana (ERC) MP in the Spanish Congress, Joan Tardà, was the first to take the stand, although his attempt to speak in Catalan was overruled by the judge, who said he should have previously requested it.

Continuing in Spanish, Tardà denied that protests were a way to ‘coerce the state,’ arguing, ‘it is a way to move social ideas forward within the democratic framework and regimen of freedoms.’

Tardà went on to tell the prosecution that the protests against Spanish police raids on Catalan government buildings on 20 September 2017 felt ‘spontaneous’ and were by no means ‘violent’.

In fact, the MP rejected any use of violence for political purposes, saying: ‘Neither Spain’s unity nor Catalonia’s independence are worth a minimum degree of violence.’

Mas was investigated for this case after attending some meetings during the 2017 independence bid, but was not charged.

Confirming that in 2016 he met with some Catalan government members now being prosecuted, Mas, who gave up the presidency in January 2016, said they did not ask him for ‘advice on holding the 2017 referendum’.

Mas also said that in the meetings he attended, officials didn’t rule out unilateral independence ‘100%’ so as ‘to avoid losing capacity to negotiate’, but that the ‘absolute priority’ was reaching a deal with Madrid.

‘The Catalan government always wanted to remain within a legal framework to avoid legal vacuums,’ added the former president, who also pointed out that ‘we had the recent experience of Scotland in 2014.’

Mas also told the prosecution that in the meetings he attended no one suggested ‘controlling’ the Catalan police so as to ensure the referendum went ahead.

Artur Mas also criticised the decision to send police to stop people from voting in the 1 October 2017 referendum.

‘I said (at the time): “Do you really think that the state will be so unintelligent to do something that will harm it directly with regards to its image in the whole world?”,’ he told the court.

‘I confess I was wrong because that was the option.’

Former deputy prime minister Soraya Sáenz de Santamaría also testified on Wednesday morning. She was in charge of the Spanish government’s regional policy during the height of the conflict.

In her testimony Sáenz de Santamaría accused Catalan independence leaders of persisting in organising the referendum on 1 October, 2017 despite a court ban and ‘knowing that violence would take place’.

Visibly angry, the former deputy prime minister said: ‘Everyone can have their own opinion and express it, but you can’t violate the law and judicial decisions and generate violent incidents.’

She admitted images of police violence during the referendum were ‘not pleasant to see.’

But she said that if voters had not been mobilised to form ‘human walls’ to prevent ballot boxes from being seized – as alleged by prosecutors – ‘maybe some images wouldn’t have happened’.

Sáenz de Santamaría testified that she didn’t believe that the declaration of independence was ‘symbolic’, saying this is why Catalonia’s self-rule was suspended.

She said that the Spanish government applied direct rule [Article 155] on Catalonia to guarantee ‘the nation’s unity and the law’s compliance.’ She added they applied it ‘with caution and proportionality’.

The former deputy prime minister also alleged in her testimony that there were ‘violent’ rallies held outside locations being raided by Spain’s law enforcement during the month of September 2017. Regarding the protests on 20 September 2017, she said ‘everyone saw violent images’ by demonstrators on that day.

She continued to say that, immediately after 20 September, 6,000 policemen were sent to Catalonia.

However, defence lawyer Jordi Pina argued that this contradicts the fact that a boat carrying officers asked to dock the day before, on 19 September. Sáenz de Santamaría responded that this decision was taken ‘previously’.

From 4pm in the afternoon, it was the turn of former Spanish prime minister Mariano Rajoy to testify.

Rajoy, 63, governed Spain from 2011 until he was ousted in June last year by a no-confidence vote over a corruption trial that hit his right-wing People’s Party (PP). He was replaced by socialist rival Pedro Sánchez.

‘They were fully aware that … as long as Mariano Rajoy was prime minister, there would be no (legal) referendum to liquidate national sovereignty,’ he defiantly told the court.

Meanwhile, referring to the independence referendum held in Catalonia on 1 October 2017 that was declared illegal by the Spanish courts, Rajoy said ‘clashes’ during the vote ‘were normal’ considering the situation.

When asked about footage of police violence against voters, he said: ‘I really deplore those images, I don’t like them. The responsibility of politicians is preventing these kinds of situations,’ he said.

But ‘if people hadn’t been called to an illegal referendum and if decisions hadn’t been taken that violated the law, neither you nor I nor anyone would have had to see the injuries suffered by some people and some members of the state security forces.’

He described the attempt to break with Spain as ‘an exceptional situation’, demonstrated by the fact that he had to impose direct rule on the semi-autonomous region for the first time in Spanish democracy.

‘I negotiate neither the compliance with the law, the Spanish constitution, nor Spain’s sovereignty,’ he said.

‘I’ve always been willing to establish dialogue,’ said Rajoy, adding: ‘I met six times with Artur Mas while we were presidents, as well as with Puigdemont.’ Yet, Rajoy insisted that regarding the independence referendum ‘there was never anything to discuss.’

‘Spain is what Spaniards decide, and not what some Spaniards decide,’ said Rajoy, adding that ‘I made clear I would not authorise an independence referendum [in all meetings with Catalan officials].’

‘Any person who’s minimally rigorous knows that [what was happening in Catalonia during the independence bid] was abnormal and improper in an advanced democracy,’ said the former Spanish prime minister.

Rajoy did not clarify who in his government ordered the police to charge voters on 1 October but did deny any personal involvement: ‘I’ve never made any decision regarding any police operation. Even when I was the interior minister,’ he said.

The former prime minister also denied that he received any calls on referendum day telling him to call off the Spanish police from charging voters, thus ruling out some claims that international leaders had intervened in the conflict.

Montoro famously told the press that ‘no public money was spent on the referendum,’ after his department closely controlled Catalonia’s finances in 2017. This, if true, would contradict the allegation of misuse of public funds that all the former Catalan government members face.

In his testimony, Montoro said the Catalan government could have ‘lied’ to fund the referendum in the weekly reports sent to Madrid.

Yet what he made clear is that they ‘couldn’t call a referendum without budget’.

‘What kind of vote is called without public money?’ he asked.

Commenting on his controversial remarks after the referendum, he argued that he ‘wanted to tell Spaniards that the Catalan government had no possibility of spending public money on the referendum.’

Other testimonies on the 8th day of the trial:

Catalan MP Marta Pascal, who was in office from 2015 until January 2018 for the Junts pel Sí pro-independence candidacy.

‘Puigdemont’s will was to speak and dialogue [with Spain], and an agreed referendum,’ she said before the judges.

After Pascal, the former MP for the pro-independence CUP, Antonio Baños, took the stand.

He was the first one to reject the cross-examination of Vox.

‘I won’t respond due to democratic dignity and antifascism,’ he said.

Meanwhile, Eulàlia Reguant also expressed arguments in the same vein. ‘Facing the far right, and a sexist and xenophobic party, I won’t respond to their questions,’ she said.