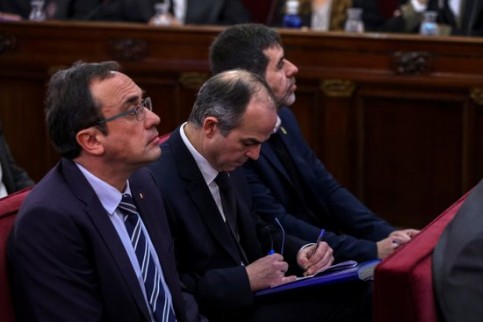 Spain’s Constitutional Court ‘lacks moral authority’, according to former Catalan minister, Josep Rull, who testified on Wednesday, the fifth day in the trial of Catalan independence leaders in the Spanish Supreme Court.

Rull is the fifth member of the Carles Puigdemont cabinet to give evidence in the proceedings, after Oriol Junqueras and Joaquim Forn (last Thursday), and Jordi Turull and Raül Romeva (on Tuesday).

The former minister accused the Constitutional Court, which declared the 2017 referendum illegal, of acting as a political tool in ‘having been systematically utilised by the Spanish government to suspend all initiatives by the Catalan parliament.’

As an example, Rull pointed to his appeal for release currently before the high court: ‘I’ve been waiting for the Constitutional Court to resolve my appeal against my preventive detention for over eight months. It has still not issued a ruling. [When we passed the referendum law], in less than 24 hours the court had met and suspended it,’ he said.

The former minister began his testimony by protesting the lack of simultaneous translation from Catalan in the court, which he said infringed his basic rights. He also refused to take questions from the far-right Vox party, which is a private prosecutor in the case.

Referring to the 2017 independence bid, Rull insisted the Catalan government had ‘used all means to get a referendum [approved by Madrid]. We tried more than 20 times with all the tools at our disposal.’

Rull also justified the actions of the former government by referring to the mandate the pro-independence parties had been given by voters. ‘People vote and it’s good that parties deliver [on their promises]. Our manifesto was not challenged in court,’ he said.

Charged with rebellion and the misuse of public funds, Rull rejected the latter accusation, saying ‘it was impossible to divert a single euro,’ and he added that the former government ‘always aimed for the right balance between the rule of law and the democratic principle.’

‘The referendum was never planned as a conclusive act for the declaration of independence,’ explained the former minister Dolors Bassa, who was second to testify at the Spanish Supreme Court today. Instead, the 1 October vote was a ‘commitment to the citizens’ and a mechanism for reaching ‘dialogue and compromise’ with Spain, she alleged.

‘It was always clear to us that if a lot of people turned out to vote, it would help us when negotiating,’ said the former Catalan labour minister, adding that ‘independence was always seen as something to be agreed [with Spain].’

Bassa further said that the law which included transitional steps towards independence passed in the Catalan parliament in September 2017 was intended to work ‘in case there was a pact with Spain’ after the referendum.

She said the Spanish Constitutional Court ruling on the referendum was ‘against what 80% of Catalans were demanding.’ And, after the court suspended the referendum, Bassa insisted ‘not a single euro’ was spent to organise the vote.

She also testified that she told the directors of the community centres that were to be used as polling stations to ‘comply with police and court orders’.

‘I never imagined that there would be clashes during the independence referendum, because we complied with what they ordered,’ stated Bassa on the stand.

A member of pro-independence Esquerra (ERC) party, Bassa has spent a year in pre-trial detention. She was released on bail after spending a month in prison from November to December 2017, only to be imprisoned again in March last year. Spain’s public prosecutor requested a 16-year prison sentence for Bassa, who is accused of rebellion and misuse of public funds.

Former Catalan public administration minister Meritxell Borràs said that the declaration of independence was a ‘political expression’ but ‘held no legal consequences’ during her testimony on Wednesday evening.

‘Our absolute majority gave us mandate’ for independence roadmap, said the ex-official, in a testimony in which she also accused the country’s Constitutional Court of being ‘politicised’.

Like her colleagues, the prosecuted leader insisted the Spanish government ‘did not want’ to dialogue, but nonetheless ‘there was a will from the Catalan government to reach an agreement’.

Borràs also insisted that her department ‘didn’t use a single euro to fund the referendum’, adding that she ‘doesn’t think any of [her] colleagues did’ either. Furthermore, she argued, polling stations ‘didn’t cost a cent’ to citizens. ‘I was not in charge of [these] premises,’ added the former official.

Meritxell Borràs quit politics after spending 33 days in prison, thus abandoning a career spanning more than 20 years. Summoned to court last March, she was allowed to walk free while most of her colleagues were again incarcerated.

Carles Mundó, Catalan ex-minister, testifying in the Supreme Court on Wednesday evening, said that he ‘did not carry out any act contravening the warnings of Spain’s judiciary [on the referendum].’

The former Catalan justice minister also said the previous Catalan government called a declaration of independence ‘convinced that it was not a crime.’ Speaking in court, Mundó also insisted that the referendum was ‘not funded with public money’, adding that ‘maybe’ it was backed by ‘private’ funds.

Mundó stepped down from politics after spending 33 days in precautionary jail in late 2017 for his role in the independence bid.

Unlike their former government colleagues, Carles Mundó, along with Meritxell Borràs, and Santi Vila (all free on bail) are accused of the lesser offence of misuse of public funds, for allegedly allocating money from the administration to pay for the referendum, which had been deemed illegal by the Spanish courts.

The prosecutor is requesting 7 years in prison, 16 years barred from office and a €30,000 fine for Mundó.

The court expects to finish with all the defendants’ testimonies this week, so sessions could go on into Friday, although the court’s original plan was to only hold sessions on Tuesday, Wednesday and Thursday.

The world of Egyptian pharaohs arrives in Girona