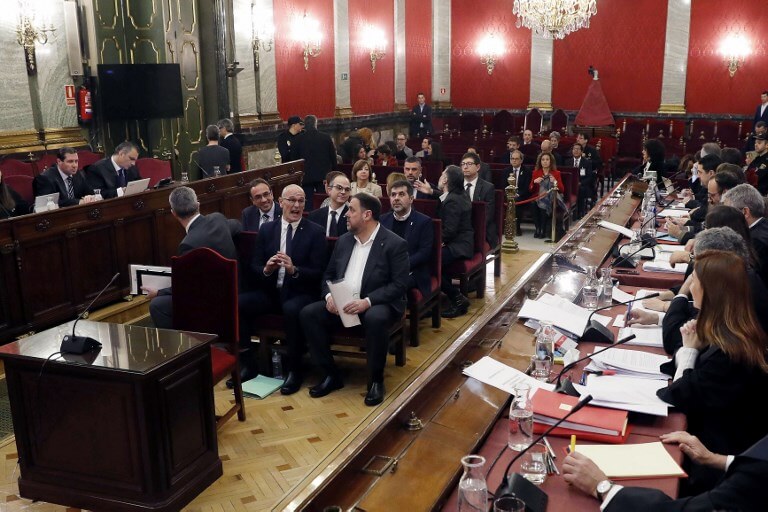 The trial against Catalan independence leaders, which is set to have a major political impact on Spain, has started today, Tuesday 12 February.

Twelve people are accused of calling a referendum and declaring independence in 2017, despite Spain’s opposition, including grassroots activists and some of Catalonia’s top political leaders.

Some have been in pre-trial jail for more than a year. The trial is expected to last months and will attract great international attention.Yet the foremost Catalan political authority in 2017, Carles Puigdemont, will not appear in court. He and other prosecuted leaders are currently in Belgium, Scotland, and Switzerland.

These are the twelve former Catalan leaders on trial at Spain’s Supreme Court in Madrid, and the charges they face:

Oriol Junqueras is the most senior political figure to face trial in the Supreme Court. He was the Catalan vice president and the finance minister at the time of the referendum, as well as the main independence leader along with then-president Puigdemont. He remains in charge of Catalonia’s pro-independence party ERC despite being in jail since November 2017.

Whilst Puigdemont left the country following Madrid’s takeover of Catalan institutions, Junqueras stayed and was subsequently incarcerated on 2 November 2017. While in prison, he ran as ERC’s candidate for president in the 21 December election.

Pro-independence parties had held on to a parliamentary majority but lost it last spring when the Supreme Court suspended Junqueras and other MPs charged in the Catalan trial, and they rejected being replaced. Junqueras will have spent 467 days in precautionary detention by the time the trial starts.

Public prosecutor’s request: 25 years in prison for rebellion and misuse of public funds

As the presidency minister and cabinet spokesperson, Jordi Turull was one of the highest-ranking government officials during the independence referendum. He entered prison on 2 November 2017, only to be released a month later on a €100,000 bail.

Elected as an MP for the Junts per Catalunya (JxCat) party, led by Puigdemont, he was proposed by the former president as his successor, when Spanish courts prevented Puigdemont from retaking the post without being present.

Turull entered prison again on 23 March, a day before he was to be elected as Catalan president in parliament. He was subsequently suspended as MP, and prevented from retaking his post as presidency minister while in prison. Turull will have spent 359 days in precautionary detention when the trial starts.

Public prosecutor’s request: 16 years in prison for rebellion and misuse of public funds.

As the interior minister, Joaquim Forn was in charge of Catalonia’s own police force, the Mossos d’Esquadra, during the independence referendum. Accused of not doing enough to stop the vote, Forn has denied any ‘political interference’ with the Mossos’ work. Along with Junqueras, Forn is the only minister who’s remained behind bars consistently since 2 November.

He is to run for Barcelona mayor as JxCat’s candidate. Forn will have spent 467 days in precautionary detention when the trial starts.

After a decade serving as a member of the European Parliament for the Greens-EFA, Romeva returned to Catalonia in 2015 to lead pro-independence parties in a unity list. He served as foreign activities minister until Spain triggered Article 155 of the constitution to suspend the Catalan government, following a declaration of independence.

He spent a month in jail, was released on bail, and was later re-imprisoned in March 2018. Elected as an MP for ERC, the Supreme Court suspended him last July. Romeva will have spent 359 days in precautionary detention when the trial starts.

Dolors Bassa was the minister of social affairs when the referendum took place. She was released on bail after spending a month in prison from November to December 2017. A member of ERC, she left her seat in parliament before appearing before the Supreme Court in March last year but was imprisoned regardless.

Bassa will have spent 359 days in precautionary detention when the trial starts.

A close ally of Puigdemont, Josep Rull has served as a member of the Catalan parliament for more than two decades. After spending one month in jail and being released on bail, he was imprisoned again last March.

Current Catalan president Quim Torra proposed that he retake his post as territory minister while in prison, but Spanish courts blocked his appointment and later suspended him as an MP. Rull will have spent 359 days in precautionary detention when the trial starts.

Catalonia’s governance minister during the independence referendum, Meritxell Borràs quit politics after spending 33 days in prison, thus abandoning a career spanning more than 20 years. Summoned to court last March, she was allowed to walk free while most of her colleagues were again incarcerated.

Just like Borràs, Carles Mundó quit politics after spending 33 days in jail in late 2017 for his role in the independence bid. He was the justice minister during the referendum.

Santi Vila was always skeptical of unilateral moves to independence while a member of the Puigdemont cabinet. He was part of the government when the referendum was called, and the day before the declaration of independence, he stepped down from his post and from politics altogether soon afterward. This, after spending one day in prison.

He was not MP in Parliament during that period, and said his department spent no money on referendum logistics.

Carme Forcadell has been one of the main key players in the road to independence since its beginning in 2012. The first years, she was leader of a large grassroots pro-independence organization, the Catalan National Assembly (ANC), and from 2015 as parliament speaker.

The Spanish Constitutional Court sent her several warnings and the Spanish prosecutor filed criminal lawsuits against her while in office, for allowing debates and votes on independence. Forcadell, however, repeatedly stated that she always respected freedom of speech and the rights of MPs.

She will have been behind bars for 327 days when the trial starts.

Jordi Sànchez took over ANC leadership in 2015 when Forcadell entered institutional politics. He led a protest outside the Catalan economy department on 20 September 2017, as a response to Spanish police raids against the referendum organisation. No-one was injured but the protest was considered a ‘tumultuous’ one, and Sànchez was charged with sedition, and then rebellion.

The grassroots leader maintains all pro-independence demonstrations in that period were peaceful. Yet he was incarcerated pending the trial, and when sessions start, he will have spent 484 days behind bars. While in jail, he stepped down as ANC leader, was elected as MP for Puigdemont’s candidacy JxCat, attempted to be sworn in as Catalan president, and was then suspended as MP.

Jordi Cuixart is the only official to be judged who has never held any public post in politics. During the 2017 referendum, he was president of Òmnium Cultural, another large pro-independence organisation, and is accused of the same events as Sànchez.

Both were the first leaders to be sent to precautionary jail in October 2017, and Cuixart will also have spent 484 days in prison when the trial starts. Unlike Sànchez, he was not involved in the December 2017 election and remained Òmnium’s leader. This organisation has dramatically increased its members since then, to 130,000.

As detailed above, public prosecutors accuse nine of the 12 defendants – including Junqueras and Forcadell – of rebellion, which carries a jail term of 15-25 years.

Under Spain’s criminal code, rebellion is defined as ‘rising up violently and publicly’, especially to ‘declare the independence of a part of the national territory’.

This charge is disputed by separatists and many Spanish legal experts. The trial will focus on the alleged use of violence, which the defendants deny.

But public prosecutors point to ‘violent incidents’ during pro-independence protests orchestrated by two grassroots groups in Barcelona on 20 September 2017.

Prosecutors also accuse the separatists of fostering ‘acts of violence and aggression against police officers’ on the day of the referendum.

The 1 October 2017 independence referendum was marred by a violent police crackdown on polling stations.

Six of the defendants accused of rebellion are also accused of misusing public funds to stage the independence bid.

Three other former Catalan government ministers face jail terms of up to seven years for disobedience and misuse of public funds.

Public prosecutors are made up of magistrates who are appointed by the government but are supposed to act independently.

The state attorneys, lawyers who represent the state, have taken a more lenient line than the public prosecutors.

The government lawyers are pushing the less serious charge of sedition and are seeking jail terms of up to 12 years.

In Spain third parties can also file criminal complaints and take part in the legal proceedings even if they are not directly involved in the case.

Vox, which is rising in the polls thanks to its hard line against Catalan separatism, is demanding a combined jail sentence of over 700 years for the 12 defendants.

The party will be represented at the court by its secretary-general Javier Ortega Smith.